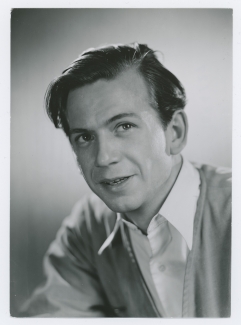 'That sounds fine. But if Sondheim comes to Stockholm, you're done for!'
Ingmar Bergman on Olin's production of A Little Night Music

Born Stig Högberg on 10 September 1920 in Stockholm, Sweden, the illegitimate son of a pharmacist, Olin spent his early years in an orphanage but was adopted when he reached school age.

Stig Olin burst onto the scene as an actor in the early 1940s, meeting Ingmar Bergman, then working in the SF script department. Olin played the first of a number of roles written especially for him in Bergman's debut Crisis. He often played Bergman's alter ego in these films, and his characters were usually named 'Jack' or 'Kaj'.

In 1953 he wrote and directed his first film I dur och skur, subsequently preferring to work behind rather than in front of the camera. However, in January 1959 both Olin and Bergman were made redundant from their jobs at SF, because of the financial difficulties experienced by the company as television grew in popularity. This setback, together with work-related stress, prompted him to abandon his career as a filmmaker and to take a job at the public service radio broadcaster Sveriges Radio instead. The gap in his employment caused him financial embarrassment, and Hasse Ekman organised a fundraising gala in his honour at the Stockholm Concert House.

Olin became head of radio entertainment in 1967 and from 1972 he was in charge of programming. He retired from Sveriges Radio in 1980. During his time there he had been granted a number of sabbaticals to work in the theatre. In 1978, for example, he staged Stephen Sondheim's A Little Night Music (based on Smiles of a Summer Night), starring Zarah Leander and Jan Malmsjö. The set designs were by Mago. Bergman, not particularly fond of this musical version of his film, said to Olin, who was trying to squeeze in as much of the film as possible into his production: 'That sounds fine. But if Sondheim comes to Stockholm, you're done for!'

Olin also wrote a number of film scores and several hit songs, the most popular of which include 'En gång jag seglar i hamn', 'På söndag' (both from 1953) and 'Jag tror på sommaren' (1967).

Married to Britta Holmberg, Stig Olin is the father of Mats Olin and the actress Lena Olin (who has also worked with Ingmar Bergman).

Stig Olin passed away on 28 June 2008 at a nursing home near Stockholm.