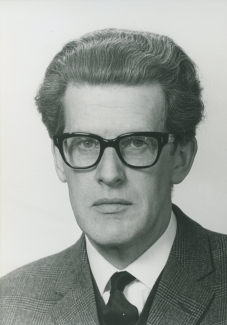 Nordgren was one of Sweden's leading film composers for many years, and wrote the music for seventeen of Ingmar Bergman's films, including The Seventh Seal (1957) and Wild Strawberries (1957). He was the Music Director at Swedish Radio from 1953-1967, and was responsible for the music for everything from Eve and Woman Without a Face (Bergman wrote the screenplays) to All These Women. Nordgren went on to work as the Orchestral Director at Swedish Radio from 1967-1977. Between 1945-1973, he created the musical landscape for nearly 100 Swedish films.

Born Herman Erik Nordgren on 13 February 1913 in Sireköpinge, Malmöhus län, in southern Sweden. In 1941, he graduated from the Royal College of Music in Stockholm. As a young man, Nordgren was one of the leading composers amongst his contemporaries, with many of his compositions staged at international music festivals.

Between 1945-1973, he wrote the music for nearly 100 Swedish films, primarily as a composer but also as an arranger and orchestral conductor. As a musician himself, he played the viola. In addition, he was the Music Director of the Swedish Film Institute from 1953-1967. He composed the music for numerous Ingmar Bergman films, beginning with Gustaf Molander's productions of Eve and Woman Without a Face (Bergman wrote the screenplays) and rounding off his Bergman work with All These Women.

A unique original song opens Smiles of a Summer Night. Void of sadness and bitterness, this romantic ballad was composed by Nordgen, with lyrics by Bergman. An identical collaboration took place in The Magician with the song 'Soldaten stod vid sitt gevär' (The soldier stood by his gun), performed by Naima Wifstrand.

As a result of the music he composed for Wild Strawberries, Nordgren was awarded a special distinction in 1957 by Swedish magazine 'Folket i Bild'. The magazine stated, 'In Wild Strawberries, Erik Nordgren has reached a zenith in the Swedish production of film music. With stylistically uniform and select instruments, he soundly represented the scenes. Furthermore, his symbolic expression of the film's main theme – how old Isak takes stock of his life – is artistically brilliant.'

In 1967 Nordgren was hired as the Orchestral Director at Swedish Radio, a position he held until 1977. His work on Jan Troell's The Emigrants was his last contribution to the film world.

Erik Nordgren passed away on 6 March 1992 in Västerhaninge, Stockholm county.