Bergman's zestful Yvonne was received as yet another artistic triumph for director, set designer, and ensemble. 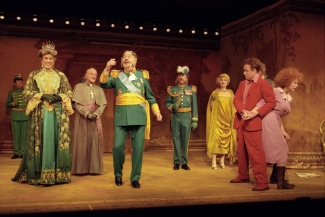 'Yvonne is not a "large" Bergman staging - it has found its soul on the small stage, functioning more through details and subtle devices than through grand gestures, scenery and tableaux.'
Lars Ring, Svenska Dagbladet

Several reviewers felt that Bergman saw more human depth in the story of Yvonne and the prince than Gombrowicz' text suggested. Much critical attention focussed on the theatricality of the performance and on Bergman's rapport with the actors.

It is obvious that Ingmar Bergman does something remarkable with the actors, releases their love to work and their confidence. It is an art that has to do with charisma, inspiration, and experience, and it can probably not be written down in a book of rules for future directors. But there is no better theatre being practiced in Sweden, perhaps not the world.

At the beginning of The Royal Dramatic Theatre's 1995-96 season, Bergman announced his decision to retire. Several critics expressed their doubts. One reviewer who had belonged to the 'anti-Bergman' group of the '60s concluded, 'This superb creativity and artistic power that he shows in Yvonne, Princess of Burgundy cannot simply be shut off. It would appear like a pure act of revenge against those of us who have not always been appreciative and impressed enough. We shall miss him forever'.

When the guest performance in New York of The Misantrophe was cancelled, The Royal Dramatic Theatre offered to replace it with Yvonne. The offer was declined because of the theme - a celebration of French theatre.

Poland, Krakow, European Theatre Union festival, 22-25 September 1996
The play guest performed in Krakow, the town where the play had its opening in 1957. An earlier attempt to make a farce of Gombrowitcz' play was met with severe criticism in Poland. In spite of this Bergman's absurdist approach was met with great enthusiasm. Some critics mentioned the conservative and traditional nature of Bergman's production but also its clarity, stringency and discipline. Others saw the performance as a homage to Gombrowitcz and a unique interpretation of his attempt to examine the mechanisms and structure of power.