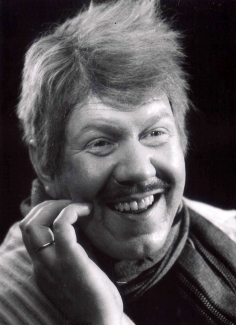 Actor 1919-1985
Having performed in some 10 films and 30 plays, Åke Fridell was one of Ingmar Bergman's most important minor part actors. Among his most memorable roles are the blacksmith in The Seventh Seal and Tubal in The Magician.

The human could still be detected despite this comedian's frightening subhuman appearance.
SF's programme notes on Fridell's blacksmith in The Seventh Seal

Born 23 January 1919 in Gävle, Sweden, Fridell’s uncle was the graphic artist Axel Fridell. Åke Fridell was raised in Falun, where he worked as an errand boy and shop assistant, as well as being involved with amateur theatre. He moved to Stockholm in his 20s, where he took singing lessons and studied at Witzansky's Theatre School between 1942 and 1944. His theatre career took off during the same period, when he debuted in Ingmar Bergman's staging of The Fun Fair at the Student Theatre in 1943.

From then on, Fridell's and Bergman's paths would cross on numerous occasions. Between 1944 and 1946, Fridell worked at the Helsingborg City Theatre under Bergman's direction, and during this period Bergman cast Fridell in his first major stage role in Jacobowsky and the Colonel.

After leaving Helsingborg, Fridell worked as a freelance actor on numerous stages, including the Boulevard Theatre in Stockholm, where he had a bit of breakthrough in En stackars lycklig man. After an additional stint in Helsingborg, he once again joined Bergman's ensemble between 1954 and 1960, this time at Malmö City Theatre. From 1960, Fridell worked at the Stockholm City Theatre until the 1970s, when he returned once again to freelance work.

During the later years of his professional career, he made no secret of his problems with alcohol which made it difficult for him to remain involved as a member of a theatre ensemble. To a great extent, his career was connected to Bergman, who cast Fridell in a number of expressive and often meaningful minor roles, quite often as a spokesman for the lower walks of life.

The first film role Fridell played with Bergman was in 1946 as the pastor in It Rains on Our Love. He went on to play the manager of a music hall in A Ship to India and an opera-singing boarding-house guest in Prison. Fridell's long and slightly angular appearance, his haggard face and often jangly laugh provided the perfect platform for portraying odd characters, both stubborn and ever-so uncouth. He quite often injected life into somewhat unpleasant, coarse characters, for example as the artillery officer who humiliated the circus owner's wife in the beginning of Sawdust and Tinsel.

Regarding his role as the crazy smith Plog in The Seventh Seal, the reviewer in SF’s programme notes stated, ‘The human could still be detected despite this comedian’s frightening subhuman appearance’. The following year, he played Vogler's (Max von Sydow) assistant Tubal in The Magician, a spineless helper who, having gotten a taste for the good life, eventually decides to leave his employer. Fridell was a bit of an expert at portraying the stereotypical Swedish character, inebriated and on the verge of tears, who is thus able to spill forth his most humble of emotions.

In 1959 Fridell was awarded the Thalia Statyetten.

One of his final, more memorable roles was as the uncompromising artist in Lars Molin's Badjävlar in 1971.