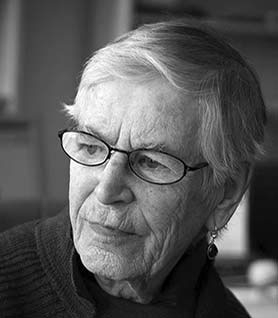 Stills photographer 1921-
Legendary stage photographer who worked at the Royal Dramatic Theatre for over 30 years, ten of them with Ingmar Bergman.

'Her photographs are far beyond a documentation of past performances, of actors now gone - they are living, breathing artworks in and of themselves, fractions of seconds captured mid-air which now live on of their own accord. The art of theatre subsists in her photographs.'
Calle Pauli, Dagens Nyheter

Beata Bergström was born 13 August 1921. Her groundbreaking fine art photography largely paved the way for how theatre photography is approached nowadays. When she embarked on her career in the 1950s, it was common for directors to stage the actors so that they were photographed within the scenography, as if they were in a photography studio. Beata Bergström broke free from this convention and instead, according to one journalist, took her photographs during rehearsals and performances. In an interview with Swedish broadsheet Dagens Nyheter's Calle Pauli, she claimed to be anything but a pioneer. 'I really had no underlying concept. I just knew no other way of taking photographs.'

Bergström took her first stage photographs at Chat Noir in Oslo in 1953, at the Cramér Ballet’s guest performance. The same year, she was hired at The Royal Dramatic Theatre after having photographed a rehearsal of Olof Molander’s The Oresteia for Swedish broadsheet Dagens Nyheter. She continued to freelance for other theatres and dance companies. Through the 1960s, Bergström worked for the majority of Stockholm’s theatres, including The Royal Opera, Teatern in Gamla Stan, Pistolteatern, the Stockholm City Theatre, the Vasa Theatre, the Little Theatre, and Folkteatern. In addition, she worked for the Little Theatre in Helsinki. She was also hired to carry out photo reportage for Swedish magazines Vi and Industria.

Bergström and Bergman's working partnership embarked with 1963's staging of Who's Afraid of Virginia Woolf? and ended with Twelfth Night in 1975. Bergström’s filmic documentation led to the exhibition Bergman Strindberg Bergström, which The Swedish Institute launched abroad. The Bergman-Bergström collaboration was not without its difficulties, however, and when Jarl Kulle and Ingmar Bergman, a pair both sensitive to noise, told Bergström to leave the auditorium and sent her to the first row during the staging of King Lear, she decided to resign the theatre to her past. Before this point, Bergström had worked with many big names in the Swedish theatre. Bergström readily cited Alf Sjöberg, who was also the director most interested in photography. ‘He wanted comprehensive stage shots. He often said that if only a few heads appeared in a photograph, the image could be from any performance whatsoever.’ In 1976 she published the photo-book Teater: ögonblickets konst fångad i bilder (Theatre: Instantaneous Art Captured in Photographs), with writings compiled by Anita Brundahl and foreword by Erland Josephson.

Later in her career, Bergström photographed the Gothenburg and Malmö performances of successful Swedish musical Kristina from Duvemåla, written by former ABBA members Benny and Björn. In 1996 the book Beyond A Wide Ocean was published, an impressive photo book including pictures from the performances and rehearsals for this musical.

Bergström's photographs have been exhibited all over Sweden, as well as in Europe, including in Paris. Since 1990, Bergström has been working with abstract tempera painting along with a group of artists in Sweden. In 1998, she was awarded the Eklövet Cultural Prize for her groundbreaking contributions to theatrical photography.