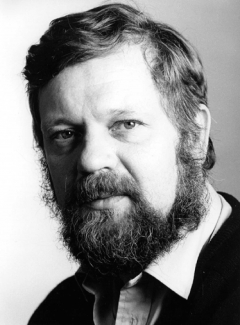 Ahlstedt began his collaboration with Ingmar Bergman after the latter’s appointment as managing director at Dramaten. He’s enjoyed success in different types of roles in a variety of contexts, but is perhaps at his best as the recurrent tragicomic figure of uncle Carl in Bergman’s autobiographical works (Fanny and Alexander, The Best Intentions, Sunday’s Children and In the Presence of a Clown); indeed, Ahlstedt has described his performance in Clown as the high point of his career. In 1991, he appeared in the title role in Bergman’s staging of Peer Gynt at Dramaten, and received international acclaim for his performance in Saraband.

‘I often think of Stig Järrel, who made 150 films and was only happy with one –Torment. For me, In the Presence of a Clown is absolutely the best goddamn film I have ever made.’
Börje Ahlstedt in Aftonbladet, 1999

Ahlstedt had his big breakthrough in Vilgot Sjöman’s two I Am Curious films in 1967 and 1968. He was involved with the Swedish Television’s first soap opera, ‘Lösa förbindelser’, in one of the leading roles as an artist with a keen interest in cooking, who leads a rather easy-going, carefree life. Ahlstedt has also worked with private theatre companies and played many uncomplicated comedic characters, and has often portrayed ‘the modern man’, with his complicated mishmash of strength and weakness as displayed in one of his more well-known film roles playing the father in Ronja Robbersdaughter.

Over the years, Ahlstedt has played larger and larger characters, including tragi-comical Uncle Carl in Bergman’s four biographical productions – Fanny and Alexander, The Best Intentions, Sunday’s Children and In the Presence of a Clown. Ahlstedt has referred to the latter production as the highlight of his career.

In 1991, he played the title role in Bergman’s Royal Dramatic Theatre production of Peer Gynt. He was also cast in one of the leading roles in Bergman’s final screen farewell Saraband, for which he was greatly praised, to a large extent abroad. Ahlstedt has been married to Birgitta Hermann since 1965.