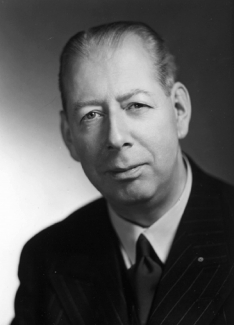 Influential radio man and film director, who in 1943 recruited the 24-year-old theatrical sensation Ingmar Bergman to Svensk Filmindustri’s script department.
One year previously, Victor Sjöström had been appointed artistic director for film production; he and Dymling were responsible for the film realisation of Bergman’s novel-like script Torment, with Alf Sjöberg directing. Bergman would be a part of the shoot as a script-boy, and even got to direct a few exterior scenes by himself.
Dymling was the head of SF, and by extension Bergman, until his death in 1961.