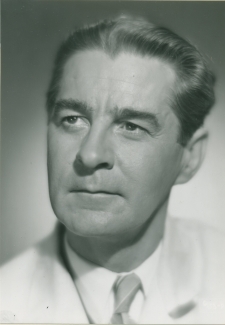 Actor who can boast the largest joint filmography with Ingmar Bergman. Known to the general public in his native Sweden primarily as a comic actor, Björnstrand began his collaboration with Bergman with the 1950's comedies, their partnership reaching an uncomfortable juncture with Winter Light in 1962.

'What's reminiscent of Cary Grant is his look that shifts, and his body that remains still. But Gunnar Björnstrand's register is broader.'
Leif Zern

Born Knut Gunnar Johanson in Stockholm on 13 November 1909, the son of Oscar Johanson, a well-known singer and leading actor at Svenska Teatern (a theatre which in the early 20th century easily outshone the Royal Dramatic Theatre), and Ella Mauléon.

Gunnar grew up in an upper-middle-class home in Stockholm's well-to-do Östermalm district. When as a teenager he told his parents that he wanted to be an actor, they were opposed to the idea. Instead he took a number of menial jobs prior to buying the name Björnstrand for 40 Swedish kronor before his first engagement at the Lilla theatre on Vattugatan. His performance led to studies with the acting coach Julia Håkansson, but after only one term with his teacher, Björnstrand was offered work by Gösta Ekman (the father of Hasse Ekman). Ekman however, who knew Gunnar's father from Svenska Teatern, refused to address Gunnar by his adopted name 'Björnstrand', referring to him instead simply as 'Johanson'.

In autumn 1933 Björnstrand gained a place at the Royal Dramatic Theatre Acting School, in the same year group as Ingrid Bergman, Signe Hasso and Irma Christensson. His debut at the Royal Dramatic Theatre came a few years later in Eugene O'Neill's Ah Wilderness. In autumn 1936 he and his wife Lillie, who he had met at drama school, both got work at the Swedish Theatre in Vasa in Finland where they acted in reviews and popular dramas alongside John 'Åsa-Nisse' Elfström, a comedy actor well known in his native Sweden.

The Björnstrands came back to Sweden two years later at a difficult time for Swedish theatres, whereupon Gunnar landed a minor role as a policeman in The Threepenny Opera. This led to a certain amount of type-casting, which saw him play a series of straight-laced policemen both on the stage and the radio. He first worked together with Ingmar Bergman in September 1941, when the latter staged a production of Strindberg's Ghost Sonata at Medborgarhuset in Stockholm:

They rehearsed for several weeks without an öre in payment with Ingmar who had guaranteed ten performances at ten kronor each. The premiere went well, the reviews were positive, but the audience comprised merely a handful of mourners, all of whom had been given free tickets anyway. After three performances Bergman said, 'We're closing, we're not going to bloody play with so few bastards in the audience! And he handed over three ten kronor notes to Gunnar by way of thanks for his efforts. But Gunnar wasn't happy. 'This won't even pay my rent, and I need some food too.' 'Food!', screamed Ingmar, 'Who the hell do you think can afford food? Live off coffee and buns, that's what I do'.

Björnstrand's first major film role was in 1942 as 'Lillen' in Hampe Faustman's Natt i hamn (written by Gunnar Fischer, who was also responsible for the cinematography). Having successfully played a Nazi on the stage in Alexander Kielland's controversial play Om ett folk vill leva (1943), which caused irritation at the German embassy with its anti fascist stance, he went on to play more Nazis on film. The first was as a Nazi policeman (a seemingly natural combination) in Lauritz Falk's Lev farligt. Weyler Hildebrand, who directed Gunnar as a Nazi in Mitt folk är icke ditt was of the opinion that given his straight back, the actor was destined to play such roles.

His film roles at this time started to give Björnstrand a level of financial security he had not previously enjoyed as a freelance stage actor, especially following his breakthrough in Arne Mattsson's comedy Sussie. Shortly thereafter he was contracted to Svensk Filmindustri, where he ended up typecast into light comedy roles, often playing alongside Sickan Carlsson or Nils Poppe. All his attempts to break this mould fell on deaf ears where the head of SF, Carl Anders Dymling was concerned.

At the start of the 1950s he was offered a one year contract at the Royal Dramatic Theatre Dramaten, but turned it down since he felt that 'film work was characterised by greater equality, not just regarding the director, but also the cameramen, grips, sound technicians – everyone in the united team making the film'. Directors at the Royal Dramatic Theatre such as Alf Sjöberg, on the other hand, were autocratic 'the actors didn't have a say in anything'.

Bergman and Björnstrand had never liked each other since the Ghost Sonata fiasco, but now they were both employed at the same company. At SF belonged to the Björnstrand comedy department, known as the 'entertainment corps', whereas Björnstrand called Ingmar and his cronies 'the gang of demons'. On one occasion they were forced to share a taxi where they immediately began to quarrel, and Bergman, according to Lillie Björnstrand, said:

'I'll tell you one thing: you'll never be in my films'. 'Let's hope not', said Gunnar, I could do without such a bloody awful experience. Then they glared angrily at each other until they both burst out laughing. The ice had been broken, and just a few days later, Ingmar phoned up proposing a role in Waiting Women.'

Björnstrand's successful screen partnership with Eva Dahlbeck in that film meant that he could give up his Nils Poppe comedies (they were reunited, however, in The Seventh Seal and, to a certain extent at least, break free from the stranglehold of comedy. In the years that followed Bergman wrote all manner of parts for Björnstrand, informing him about them over meals at the Sturehof or Konstnärsbuffé restaurants in Stockholm.

Gunnar Björnstrand played significant roles, often as the director's alter ego, in Bergman's films of the 1950s. Their partnership reached an uncomfortable juncture with the filming of Winter Light in the autumn of 1961. Prior to the shoot Björnstrand was informed by the SF doctor that his blood pressure was alarmingly high, and he was strongly advised to abstain from all alcohol, late nights and conjugal activities. If he didn't heed these warnings he ran the risk of a brain haemorrhage and ending up wheelchair bound for the rest of his life. The shoot was overshadowed for Björnstrand by this nagging threat. He sought a second medical opinion and was advised to stop taking the medicines he had been prescribed, whereupon he immediately started feeling better. Yet according to Lillie Björnstrand the shoot was still very troublesome for Gunnar, since Bergman often assumed "an aggressive and provocative attitude".

In the book L136, a diary about the shooting of Winter Light, Vilgot Sjöman writes:

I.B. ruffles Gunnar's talent with irritated fingers  because he's easily fired up and in no condition either to control or calm himself. It's as if he's in a vice. I can see Gunnar's performance in Winter Light growing into a major achievement  but it's growing out of a process of anxiety.

After 40 films in 18 years Björnstrand's contract with Svensk Filmindustri expired in 1965. His participation in Bergman's films also became more sporadic, and the parts he played grew smaller. Free from his obligations to SF he could work with other film companies, and even began to make films outside Sweden, such as Gabriel Axel's Danish-Icelandic co-production Den røde kappe, in which he played alongside Eva Dahlbeck, and Florestano Vancini's Italian Violenza al sole, together with Bibi Andersson.

When his film parts began to dry up Björnstrand increasingly returned to comic stage roles, playing some highly popular parts in TV dramas, including Professor Higgins in Pygmalion alongside Harriet Andersson and Barbro Hiort af Ornäs in 1968. He was also involved in protests against the Vietnam War, and he and Lillie could often be spotted at various demonstrations.

Having suffered from thrombosis in 1970 he began to take things easier on the work front. His final film role was in Fanny and Alexander, by which time he had already begun to develop symptoms of Alzheimer's syndrome.

Gunnar Björnstrand died in Stockholm on 24 May 1986.