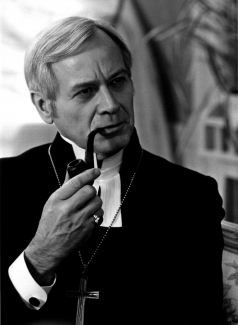 Actor 1932-
One of Sweden's most versatile performers with a resume spanning the range from Lars Norén plays at the Royal Dramatic Theatre to drag show musicals. Played Bishop Edvard Vergérus in Fanny and Alexander.

Jan Malmsjö was born 29 May 1932 in Malmö, Sweden, the son of ‘Fritzi’ (Fritz and Annie), a dance duo and variety show couple who owned a hair salon. According to Malmsjö, he appeared on stage before he was even born. At a young age, his theatrical life began, and he had his debut as a nine-year-old in the operetta A Waltz Dream. He acted both in the Folkets Park Theatre and at the newly opened Malmö City Theatre in the mid-40s, and had his film debut in 1947 in Ebberöds Bank.

Malmsjö decided at an early age that he was going to be an actor, and in 1949 he applied to but was rejected at the Royal Dramatic Theatre Acting School. After spending a year at Axel Witzansky’s Acting School, he was accepted on his second attempt in 1950. His acting skills were quickly noticed and he was awarded the Gustaf Fredrikson scholarship.

Malmsjö had his Royal Dramatic Theatre stage debut in a minor role in Fallna änglar in 1951, and after graduating from acting school he was employed at the theatre from 1953-54. In 1954 the Royal Dramatic Theatre production of Fadren made a guest performance in Gothenburg, and Malmsjö lured Director Karin Kavli to the Gothenburg City Theatre, where he was employed between 1954-55 and 1956-58. At the end of his Gothenburg stint he sang Snurra min jord in Lars Forssell’s review A Pair of Donkeys. This turned out to be a huge success and jump-started Malmsjö’s career as a recording artist.

In 1959 he was a member of the first television ensemble, and during the first half of the 1960s he spent a hectic few years acting in theatre, film and TV. When it came to television, he acted in a number of highly acclaimed roles in Åke Falck’s TV programmes, including Utan gräns, Kaskad, Narr and Som en skänk från ovan, and he counts Falck as a director who had a great impact on his acting career.

After taking a one-year sabbatical in the USA, where he worked in Hitchcock’s Torn Curtain, he returned to Sweden, where he spent the latter half of the 1960s honing his skills as one of the country’s most versatile entertainers. In 1971, he was once again hired at the Royal Dramatic Theatre, where he remained until 1984. On the Swedish national stage he played a number of more serious roles, including Hamlet in 1974, which surprised many who had primarily come to consider him an entertainer.

This dichotomy became even more apparent in his perhaps most major film role, when he played the bishop in Fanny and Alexander, a truly formidable figure as compared with the normally joyful characters he had portrayed, working as an ‘entertainer’ in the true sense of the word. Another significant Malmsjö role, which reflected his versatility, was in the musical La cage aux folles (The Birdcage), which set audience records at the Malmö City Theatre during the 1985-86 season, with 233,643 attendees over 152 performances.

During different periods throughout his career, the multi-faceted Malmsjö has jumped between varying media and genres. 1988-89 is a good example: in 1988 he gained 20 kilos in order to act in Lars Norén’s Stillheten at the Royal Dramatic Theatre. He was then involved in the burlesque Skaffa mig en tenor at Folkan, and then performed in the operetta Batman at the Kristianstad Operetta Company. He even managed to act in the summer outdoor theatre, to record with Leif Kronlund’s Big Band and finally to go on tour with drag act After Dark.

Malmsjö later returned, as if by chance, to the Royal Dramatic Theatre, where he collaborated with his son Jonas on Bergman’s two final theatre productions in the early 2000s.