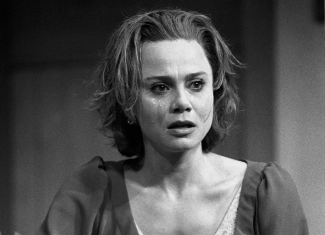 One of Ingmar Bergman's favourite stage actresses during the 1980s, who gave memorable performances in his Royal Dramatic Theatre stagings of Hamlet and King Lear, Olin was hailed as 'a new Garbo' abroad.

Born 22 March 1955 in Stockholm, Lena Maria Jonna Olin is the daughter of actor and director Stig Olin and actress Britta Olin (née Holmberg). In 1974, Olin came second in the Miss Sweden competition, and went on to win Miss Scandinavia later that year. After secondary school, she worked as a volunteer nurse and substitute teacher before applying to the Stockholm School of Dramatic Arts on Ingmar Bergman's advice. After two rejections, she was eventually accepted in 1976.

After graduating in 1979, she was the only member of her class to be offered a permanent position at the Royal Dramatic Theatre. She had already acted in her first major film role in Hasse & Tage's The Adventures of Picasso, and in 1980 she played yet another big part in Theodor Kallifatide's Love.

Olin quickly filled the shoes as one of Ingmar Bergman's favourite actresses, and was cast in leading roles in his stagings of King Lear and A Dream Play, and would have played the leading role in Miss Julie had she not been pregnant. When the production was taken to New York for a guest performance in 1991, she had the opportunity to play opposite Peter Stormare in the role of Jean.

After playing a small part in Fanny and Alexander, Bergman wrote one of the leading roles for her in his TV production After the Rehearsal.

The 1980s were also the start of her international film career, successfully kick-started in The Unbearable Lightness of Being, where her performance led the critics to call her 'a new Garbo' and the likes in American critic circles. Her role in Enemies, a Love Story won her the 1989 New York Film Critics' Circle Award for the best supporting role, and the following year she was nominated for an Oscar.

Her role in cinematic flops, such as Havana with Robert Redford and Mr Jones with Richard Gere, were more characteristic of her work in the early 1990s. She played a fascinating role as a Russian hitwoman in Romeo is Bleeding in 1993, which led to her greatest success of the 2000s, a supporting role in the popular TV series Alias.

Olin had a relationship with actor Örjan Ramberg, with whom she had son August. In 1994, she married director Lasse Hallström, with whom she had daughter Tora. Olin has acted in a number of her husband's films, including Chocolat, for which she was nominated for a BAFTA.