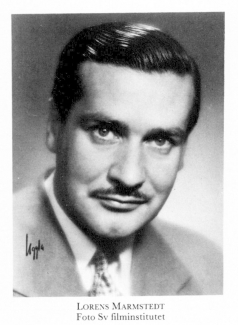 Producer 1908-1966
Enterprising and audacious film and theatre producer who fostered a new generation of Swedish film directors in the 1940s via his own company, Terrafilm, Marmstedt had a profound influence on the young Ingmar Bergman, whom he also engaged as a theatre director at his own Intima theatre in Stockholm.

'We [Ingmar Bergman and Hasse Ekman] both loved Lorens. He was special, he was with us all the way, from our first draft scripts through to ensuring that we got the right cinemas in which to premiere our films. We were truly privileged in that we could test our wings and carry on doing so, even if our initial efforts weren't successful.'
Ingmar Bergman, 1992

Lorens Marmstedt was born Sigfrid Lorens Eriksson in Stockholm on 29 October 1908, the son of a northern Swedish businessman (the head of AB Medelhavskompaniet) and his Italian wife. Between themselves his parents always spoke French, yet his mother usually spoke only Italian with her son, his father Swedish. During Lorens' early years, the family spent extended periods in France and Italy, and the culture of these countries coupled with his mother's fiery temperament had a strong influence on his developing personality. After the death of his father he assumed the more artistic-sounding name of Marmstedt.

At 18 years of age Marmstedt was employed by Svenska Dagbladet, where between 1927 and 1931 he wrote film reviews under the pseudonym Siglon. He became one of Sweden's first cinephiles, writing enthusiastic articles about Soviet films and celebrated European directors such as Ernst Lubitsch and René Clair.

In 1938, after a somewhat lacklustre spell as a film director, he founded AB Terrafilm which originally functioned as a distributor of French films. Shortly thereafter he formed an artistic alliance with the directors Schamyl Bauman and Anders Henrikson, and a financial arrangement with the Sandrew group Sandrewkoncernen, and returned to making films. Four box office hits in quick succession inspired him to bolder initiatives, and in the 1940–41 season Terrafilm enjoyed its first artistic breakthrough, establishing Marmstedt as a central figure in Swedish film.

Throughout the 1940s Lorens Marmstedt invested in a new generation of film directors such as Hasse Ekman, Hampe Faustman and Ingmar Bergman (who had been given the sack by Svensk Filmindustri following the fiasco of his first film Crisis), affording them generous patronage. Marmstedt also managed to persuade established authors to write for the screen, encouraging them to collaborate with his young directors.

By 1948 Terrafilm had advanced plans to make a film version of Ibsen's A Dolls House. Ingmar Bergman was to write the screenplay, and Alf Sjöberg to direct the film which would feature a major American film star. The project failed (yet Bergman did produce the play many years later in 1989 at the Royal Dramatic Theatre). Terrafilm turned instead to Viktor Rydberg's Singoalla, with a Swedish dialogue writer, a French screenplay and a French director, Christian-Jacque. The film, shot in Swedish, French and English versions, was the biggest Swedish production since the silent film era, with a budget three times greater than most Swedish features of the day. The end result, which starred Viveca Lindfors, was a financial failure.

Marmstedt's own Intima theatre opened at Odenplan in Stockholm on 17 October 1950, with a production of The Threepenny Opera directed by Ingmar Bergman. Marmstedt ran the theatre throughout the 50s, organising open air theatre at Skansen during the summer months.

As an independent film producer Marmstedt was subsequently involved in two French productions. But in 1952, despite the Singoalla fiasco, a major new co-production drew him back to Sweden: a film of Stravinsky's ballet The Firebird, directed by Hasse Ekman and starring Marmstedt's third wife, Ellen Rasch. It was to be his first film both in colour and in a completely English language version. Yet this film too was to prove an artistic and financial disappointment, prompting the head of Sandrews, Anders Sandrew, to impose tougher conditions for future productions. From the spring of 1953 onwards Sandrew took a more active role in the company. Terrafilm's productions became more mainstream in tone, and the company lost its experimental edge, making its last film in 1957. In 1959 Marmstedt himself retired completely from his own company.