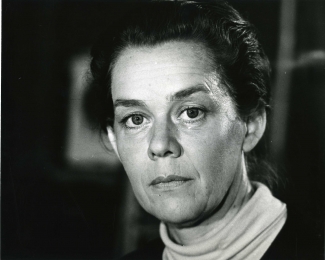 Born Ulla Lundberg on 12 June 1916 in Stockholm, she published her first novel, The Tree, in 1940. In 1952, her first big public success came with the novel The Women's House, which was made into a film, Caged Women, one year later by Erik "Hampe" Faustman. In addition to writing short stories and novels, Isaksson also penned film and theatre manuscripts, including the Bergman films Brink of Life and The Virgin Spring.

Isaksson fortified her role as psychologist, with an intuitive understanding of human relationships, through her writing, including her novel The Blessed Ones which Bergman made into a television piece in 1986. A number of her 50-odd novels are characterised by their religious subject matter, for example Uttermost in the Sea and Dit du icke vill, where the witch trials of the 1600s in a village in Dalarna are compared with contemporary protocol. Her later books were concerned more and more with contemporary problems, and offer profound glimpses into Swedish life. In her novel Paradise Square, which was made into a film in 1977 by Bergman's Cinematograph company under the direction of Gunnel Lindblom, poses the question: What are we doing, our culture, to children? How do we avoid Aniara-children? In other words, cold-hearted egoists.

In the late 1970s, Isaksson and her husband Erik Hjalmar Linder wrote a two-part biography on Elin Wägner, with subheadings Amazon with Two Breasts and Daughter of Mother Earth. The Book about E, where she writes about her sorrow and incompetence in the face of her husband's dementia, was very well-received when it was published in 1994.

Ulla Isaksson passed away in Stockholm on 24 April 2000.