Bergman's third film based on a script by Ulla Isaksson, following Brink of Life (1958) and The Virgin Spring (1960). 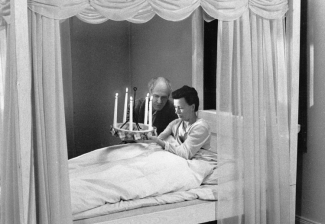 "A melodrama reeking of both sulphur and perfume."
Susanne Marko in Dagens Nyheter

The story revolves around middle-aged teacher Viveka (Harriet Andersson) and her slightly younger husband Sune (Per Myrberg). Love has made Viveka vulnerable and jealous, inexorably turning their marriage into a pitch black folie a deux.

Following problems with the release of After the Rehearsal, which against his wishes saw cinema distribution abroad, Bergman abandoned the 35 mm format in favour of tv technology. The Blessed Ones was his first outing using this, for him, new format.

The reception was mixed and the film was by turns described as powerful, compassionate or clinical. Francois Ramasse in Positif found it being the darkest in Bergman's oeuvre.