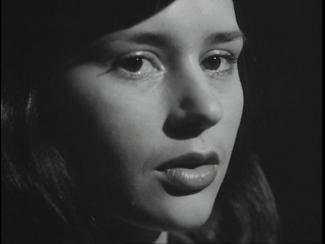 'Harriet Andersson is one of the cinematographic geniuses. You only meet a few rare shimmering species on the winding road through the jungle of the trade.'
Ingmar Bergman in Images

Born 14 February 1932 in Stockholm, the daughter of naval officer Johan Valfrid and Agda Teresis Andersson. She entered Calle Flygare's stage school at the age of 15, moving on to Oscarsteatern where she played in Annie Get Your Gun and Snow White at children's matinees in 1949.

Harriet Andersson's first venture into film was in commercials, following which she played 11 roles in two years, from an extra in Motorkavaljerer in 1950 to a leading part in Defiance, written by Vilgot Sjöman and directed by Gustaf Molander. This brought her to the attention of Ingmar Bergman, who gave her the part of Monika in Summer with Monika. Parallel with her film success, she continued her career in the revues at Scalateatern, where one of her singing numbers included 'Would you like a Summer with Monika?' Ingmar Bergman subsequently wrote a number of film parts for her to play, including Sawdust and Tinsel, A Lesson in Love, Smiles of a Summer Night, and Through a Glass Darkly, all of which helped to establish her as one of Sweden's leading actresses.

In 1953 Harriet Andersson joined Ingmar Bergman, with whom she had begun a relationship, at Malmö Municipal Theatre. She won critical acclaim in Bergman's production of Pirandello's Six Characters in Search of an Author, Kafka's The Castle, and as Rachel in Vilhelm Moberg's Lea and Rachel. In 1956 she went back to Stockholm, where she received excellent reviews for the title role in a newly-written dramatised version of Anne Frank's Diary at the Intiman Theatre. At roughly the same time, Liv Ullmann was playing the same role on the stage in Stavanger.

Harriet Andersson not only worked with Ingmar Bergman, but with several leading Swedish film directors, such as Jörn Donner in A Sunday in September and Mai Zetterling, in Loving Couples and The Girls. Many (herself included) would agree that the world of film is Harriet Andersson's natural environment, and she has played more than 90 roles in both film and television. Her most notable recent appearance was in Lars von Trier's Dogville in 2003.

Harriet Andersson has a daughter, Petra (born 1960), and during the 1960s lived with Jörn Donner, with whom she made a number of films. She picked up the award for best actress at the Venice Film Festival for the part she played in Donner's 1964 film To Love.

In his 1992 book of interviews 'Tre dagar med Bergman' ('Three Days with Bergman'), Ingmar Bergman declared Harriet Andersson to be one of the finest actresses in the world. 'I think the camera loves the particles that surround Harriet, and that she likes them too,' he declared.

In 2005 she published 'Harriet Andersson', a book in interview format, in which she candidly answers the questions posed by co-author Jan Lumholdt, unlike many other actresses connected with Bergman who have been less willing to give a full and frank account of the master. Her comments include a rather acid summary of her involvement in Bergman's films. 'So first he made me a maid, then crazy and then he killed me off a couple of times.'

Scholarship awarded by Svensk Filmindustri for Cries and Whispers (1973)

The Swedish Film Academy's plaque for Through a Glass Darkly (1961)