Bergman does away with set pieces and presents a heavily scaled-down production of Franz Kafka's The Castle. 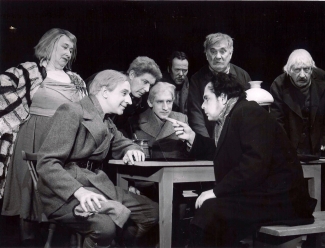 'It hit me that one required nothing more, no lighting, nothing - nothing more than the performer. So simple.'
Ingmar Bergman

Bergman displayed an almost empty stage: a few chairs, a table, and some projected images on the back wall reminiscent of an unreachable castle or spiritual wasteland. The lighting was a form of dreamlike clair-obscure in black, grey, and white tones. The overall effect was that of an expressionistic nightmare. The critics reacted with enthusiasm - in DN they termed the production a new feather in the cap for Malmö City Theatre.

For years Bergman had been greeted as Sweden's most promising but also most juvenile director. At age 35 he was finally said to have reached maturity as a stage director.

Four distinct features in Bergman's work at Malmö now began to crystallize in the critical response:

- He coupled artistic energy and discipline with an ability to transform the written word into dramatic performance.

- Bergman's work was based on a careful and sensitive reading of the dramatic text.

- He displayed an unusual visual and acoustic creativity.

- He showed a remarkable ability to get the performers to excel.