Bergman was beginning to view A Dream Play as a life companion, and shortly after staging this, his fourth production of the piece, he begins contemplating his fifth staging. 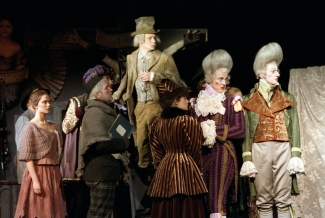 'I recognise many of them.'
Per Erik Wahlund, Svenska Dagbladet

This two-and-a-half hour production of Strindberg's A Dream Play was about 20 minutes longer than Bergman's 1970 staging. Played without intermission on The Royal Dramatic Theatre's Small Stage, a former movie house, this became a performance frought with frustration. In a Swedish TV interview prior to the premiere, Bergman indicated his doubts about a play 'where some walk about declaring that mankind should be pitied'.

For those who had seen Bergman's 1970 and 1977 versions of A Dream Play, the 1986 production was somewhat of a deja-vu. Seven of the actors had participated in the 1970 production.

Bergman's later words that this, his fourth staging of A Dream Play, lacked real enthusiasm were confirmed in the reviews. 'A distracted Dream Play', said Mario Grut in Aftonbladet. 'The Dream Play is criticized' was the headline of DN's summary of the critical response to Bergman's production. Certainly, with few exceptions the reviews lacked the rave exclamations of Bergman's earlier post-Munich productions.