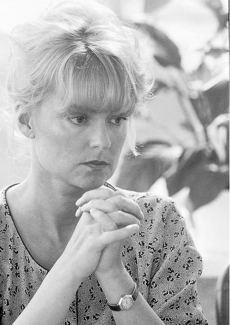 A regular member of Sweden's Royal Dramatic Theatre ensemble, Richardson appeared in ten Bergman productions, most memorably as Pauline Thibault in In the Presence of a Clown.

'He worked so incredibly well with actresses. He saw a person, really saw me. He constructed a fortress around us so that something magical could take place within.'
Richardson on her impression of Ingmar Bergman

Marie Richardson was born in Hälsingland, Sweden, on 6 June 1959. Her interest in theatre was sparked whilst she was still at grammar school, and after completing secondary school, she enrolled at Skara Skolscen, an acting school. She then went to Stora Teatern in Gothenburg, where she worked in the costume department.

Between 1982-85, Richardson studied at the Stockholm Academy of Dramatic Arts. After graduation, she was offered a permanent position at the Royal Dramatic Theatre, where she made her breakthrough in 1987 in The Queen's Tiara. The same year, she made her film and television debut in Jonas Cornell's Lysande landning.

Marie Richardson acted in a number of memorable supporting roles under Ingmar Bergman's direction. Their theatrical collaboration became more substantial in 1989, when Richardson acted on stage in Madame de Sade and A Doll's House. Richardson's first role in a Bergman film production was in the TV film The Best Intentions. Her most well-known, memorable Bergman role, however, was as Pauline Thibault, the young fiancee to eccentric engineer Carl Åkerblom in In the Presence of a Clown.

After Bergman's death, Richardson commented on their collaboration:

He meant a great deal to me for many years. We worked together a total of seven or eight times. He worked so incredibly well with actresses. He saw a person, really saw me. He constructed a fortress around us so that something magical could take place within.

Marie Richardson's first international role was in 1999 in Stanley Kubrick's final film, Eyes Wide Shut, where she played a grieving daughter in a long, intense scene. Nevertheless, Richardson devotes most of her attention to Swedish roles. On the silver screen, she is most famous for her roles in Björn Runge's films, including Om jag vänder mig om and Mouth to Mouth.

Richardson is married to actor Jakob Eklund, who also acted in a number of Bergman productions.