As with many of Bergman's early dramas, The Fun Fair is a meta-theatrical story, this time following an acting company as they wait for the acting season at the fair to begin. 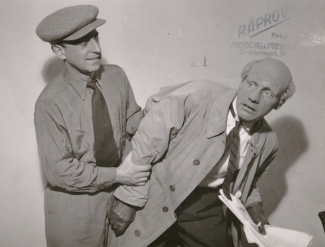 'A banal, Swedish, winter, everyday tale, characteristic of 1940s films, the likes of which Bergman will shortly make.'
Henrik Sjögren

This production was Bergman's first collaboration with Åke Fridell, an actor who came to be of great importance in Bergman's films. The Fun Fair was Bergman's last production for the Student Theatre. As had been the case at Mäster Olofsgården, he left a difficult spot to fill.

'...Ingmar Bergman remains a very talented and imaginative director, and there are other authors to choose from.'
PGP in Aftonbladet