A radically re-worked version of Ibsen's drama, where Bergman rounds off his theatrical career. 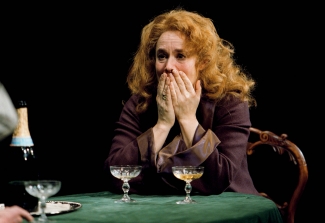 'It's as if Strindberg and Bergman got together over a few beers and decided to modernise Ibsen.'
Stefan Eklund, Borås Tidning

Bergman's radical re-working of Ibsen's original was commented on by many critics. Summing up Bergman's version, Ingegärd Waaranperä in Dagens Nyheter remarked: 'He is playing, of course, with Ibsen, with Strindberg, and with the actors. In his own unique way he moves between decades, dramatists and productions, cutting and pasting, contriving with just a hint of mendacity.' Several others remark on the strong personal stamp that runs through Bergman's version, drawing clear comparisons with the director's own life. Björn Widegren in Gefle Dagblad:

[Bergman] has pictured himself as a young man in the young Osvald; pictured his mother, perhaps in Mrs Alving (think of  Pernilla August in The Best Intentions) and most definitely his father in the dead Chamberlain Alving, the memory of a scoundrel in a starched collar, also called Erik, Ingmar's father's name.'

Peter Luthersson in Süddeutsche Zeitung observes that one can discern Bergman coming to terms with his own life in the production:

Everything is here. Yet Bergman is not merciless on himself, nor even harsh. Counsel for the defence and prosecution speak with the same voice, swapping places. The true and the false are mixed together, juxtaposed. Ingmar Bergman goes just so far but no further.

Reconciliation and comfort emerge, not simply from one point of disquiet in the play but from all its aspects, through tiny fissures in the text and the acting, springs of humour bubble forth, sudden self-awareness, human warmth and disarming honesty. This older Bergman is more contented, secure and cheerful in disposition than the young Bergman ever was.

Lars Ring in Svenska Dagbladet comments on the red clown's nose that Bergman placed on Jonas Malmsjö's Osvald: "It is hard to see this as anything other than a very personal comment from Bergman: with an oblique grin he paints Osvald as an egotistical, opinionated and Oedipal young Ingmar". Yet Ring also observes that this aspect of the production is not hammered home to the audience, but functions rather as a background reinforcement of what is happening on the stage. Many critics also see parallels between Ibsen's scourging of bourgeois mendacity and hypocrisy and Bergman's own outbursts against the bourgeois environment with which he had been familiar since childhood.

Certain criticism was aimed both at the production itself and Bergman's own adaptation of the play, regarded by some as rather self-indulgent. Writing in Borås Tidning, Stefan Eklund felt that the overall effect was not entirely successful: "It feels as if Strindberg and Bergman have got together over a few beers and decided to hot up Ibsen." None found it boring, yet many felt it to be more striking than affecting. Yet although the production was regarded by some as rather flat and not particularly dynamic, the acting itself drew admiration. Pernilla August was praised unreservedly by many critics for her strong and enlightened interpretation of the role of Mrs Alving. Leif Larsson in Västerbottens-Kuriren observed that:

[...] although we rarely forget that we are at the theatre, something quite exceptional happens. When Pernilla August delivers her monologue about her dead husband's lecherousness, his deceit and baseness, it is as if time and space are dissolved, leaving only a woman who has been hurt, a person who in her bitterness and despair is forced take charge of her home at the risk of cutting herself off from her own emotions.

Several critics praised Jan Malmsjö's interpretation of Pastor Manders, a character not exactly sympathetic, yet one who does display a certain humanity. Angela Kovacs' bold interpretation of Regine adds rare weight the role. She frankly makes clear her intentions to carve a better future for herself, not least in the scene where she brusquely dismisses the offer of the carpenter Engstrand (Örjan Ramberg) to take up a place in the seamen's home. This particular Regine wants to create a life based as far as possible on her own terms, given the class constraints under which she lives.

Jonas Malmsjö's Osvald had a mixed reception. Some critics felt that he was over-acting, that his portrayal of the character failed to engage. The final scene, with a naked Osvald in the arms of Mrs Alving, also aroused mixed emotions. Some found the scene full of clichés and hyperbole, and remained completely unmoved. Others were not so negative: 'the melodramatic final death scene is the one which feels the most dated', writes Nils Schwartz in Expressen, "'yet instead of toning it down, Bergman brazenly goes for full-on sentiment in a pieta scene that verges on the incestuous. And the strange thing is that he manages to maintain my full engagement.'

Others describe the scene's ability to move the audience in more positive terms. Margaretha Levi in Norrtelje Tidning:

The final scene is a violent release, an explosion of angst that is so dreadful as to be almost unbearable. [...] It is at once both powerful and terrible. Engaging yet repulsive. It could hardly be any more distressing.

The final image is utterly Bergmanesque, bold and touching: as naked as the day he was born to a life of lies, the son devours his own death from the hands of his mother.

Norway, Oslo, Ibsen Festival, 9-11 September 2002
Many had already reviewed the performance when it opened in Stockholm. One of the remaining reviewers was sceptical and found the performance traditional and not very creative in its focus on the text and with the actors either standing or sitting in a frontal position. The ending she called 'a piece of comic art'. In contrast, another critic thought Bergman's theatrical force was so strong it overshadowed his exaggerated and questionable ending.

UK, London, The Barbican, 1-4 May 2003
One critic called it an 'astonishing, historic piece of luck to see the Royal Dramatic Theatre of Sweden production with which the great Ingmar Bergman marks his farewell to film and theatre directing'. Many though found Bergman's Ghosts too explicit, crude, and eroticised. Other reservations were based on the impression that the performance relied too much on Bergman's filmmaking style, the seemingly use of a slow, probing camera of close-ups made the performance static.

USA, New York, Brooklyn Academy of Music (BAM), 10-14 June 2003
This was the 11th and final Bergman guest performance in New York and it became a farewell homage to Bergman and the Royal Dramatic Theatre team. The artistic leader of BAM, Joseph Melillo, called it a painful parting and singled out Bergman's unique directorial vision, his 'conzeptualized solutions', and the ensemble's high quality acting. Several critics weren't too fond of Bergman's frank obscenity. One of them called it a way of dragging 'the implicitly obvious to the surface'. Many forgave the flaws because of the acting, especially Pernilla August was praised.

The plays crowning glory is Pernilla August. She doesn't play the role of Mrs Alving, she plays all the roles of Mrs Alving (with) a precise physicality, which only seems effortless; a voice like the mountains, full of sudden ascents and steep drops, both dangerous and beautiful. That ought to be the envy of any actress; warmth loveliness, wit.