Per Olov Enquist's play about Selma Lagerlöf and Victor Sjöström after the shooting of The Phantom Carriage, one of Bergman's favourite films of all time, seemed tailor-made for the director. 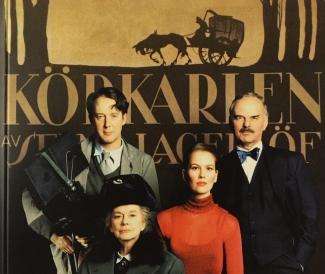 'I took the play in my hand, went down to the head of the theatre (Ingrid Dahlberg) and said, "I'm the only one who knows how this should be done." I got precisely the ensemble I wanted.'
Ingmar Bergman

In his plays, Per Olov Enquist has often examined the creative process. In The Image Makers, following on from Tribadernas natt and The Dance of the Rain Worms, Enquist once again makes the life of a well-known writer the starting point and framework for the drama that unfolds. After Strindberg and Hans Christian Andersen, it was now the turn of Selma Lagerlöf. Bergman's production of The Image Makers marked the world premiere for the play, opening on 12 February 1998 at Målarsalen of The Royal Dramatic Theatre.

The events of the play are as follows: the film director Victor Sjöström has been shooting Selma Lagerlöf's novel The Phantom Carriage. He has invited the author to Stockholm to show her a number of scenes from the film. The play is set in 1920 in a screening room at Svensk Filmindustri (Swedish Film Industry). In addition to Sjöström, those present include the talented cinematographer Julius Jaenzon, and the young actress Tora Teje, Sjöström's mistress and an object of Jaenzon's desire. The meeting between Lagerlöf, an older woman and world-famous author, and a young and talented actress becomes the focal point of the drama.

The Image Makers deals with the creative process and the impulses which lie behind it, in this case the trauma caused to children who grow up with an alcoholic father. Selma Lagerlöf's father was himself an alcoholic, and Enquist's thesis is that there was a strong underlying sense of guilt in her relationship with her father which influenced her life and writing. In The Image Makers Enquist reveals how the pain of this relationship was more or less the motor which spurred her on to write. Through her straightforward and frank attitude, the young Tora Teje manages to prize open Lagerlöf's seemingly impenetrable facade, and an unexpected intimacy develops between them.

USA, New York, Brooklyn Academy of Music (BAM), 2, 4-6 June 1999
Four performances were given and were together with the films The Phantom Carriage, Wild Strawberries and the TV-film In the Presence of a Clown included in a Bergman mini-festival. Taken together one critic wrote, 'Mr Enquist's play and the three movies represent a magical hall of mirrors that is almost dizzying in its multiple refractions of words, images, sounds, rhythms and movement.'

France, Strasbourg, 5-7 November 1999
Three performances were given but no reviews have been located.

Italy, Milan, 13-14 November 1999
Two performances were given but no reviews have been located.

Several critics focus on the dynamics of meeting between Selma Lagerlöf and Tora Teje and the tension that their meeting provokes. Any further development seems at first highly unlikely, since the young actress appears vulgar, prattling and devoid of all respect for the gravitas of the famous writer. Writing in Dagens Nyheter, Leif Zern observed that:

Enquist has developed into a supremely gifted developer of plots, and in Ingmar Bergman he has found a director who makes the most of the qualities of his writing. Dark and light are woven together into a uniform whole. As often in the case of Bergman, the playful prologue is the preface to an underground journey. He sees the dramatic, chamber play possibilities in the paradoxical meeting between Selma and Tora: the world-famous writer and the young yet celebrated actress, one the master of language and the other a disrespectful, uneducated and prattling natural talent. These two opposite poles come together with an empathy that both surprises them and binds them closely together.

Certain critics regard the play more as a drama of ideas than a truly dramatic text. The device of trying to prove Selmas Lagerlöf's troubled relationship with her father is too transparent. Ingmar Bergman's direction, however, partly manages to avoid this, not least through his sure ability to present the workings of his characters' minds in a physical way. Zern comments on the classical nature of the play, how the protagonists move from ignorance to awareness, yet feels that this would not have been possible in any realistic way without Anita Björk. 'Her voice has the most beautiful ring of all in contemporary Swedish theatre, and here she uses it to create space around her character, leading us step by step into what, for Selma too, is something problematic and deeply hidden.'

Most critics comment on Bergman's consummate skill in casting. In Elin Klinga, Anita Björk met an actress who can match her ability to prize out the subtleties of a character. The meeting between these two actresses and the director was one of great depth.

Writing in Aftonbladet, Claes Wallin observes that the theme of the play shares much in common with Bergman's own creativity and creative processes. Wallin sees this as the true theme of the production, despite Enquist's declared intention to explore alcoholism and the burdens of mutual dependence.

Margareta Sörenson in Expressen concentrates on Bergman's involvement with both cinema and the theatre, and the recurring issues about the nature of each genre. The high tempo and lively clashes of the first act are followed by a second act more slow in nature, causing Sörenson to reflect, 'Here there is less by way of attack and energy from Ingmar Bergman than has previously been the case in his productions. He is looking outwards and back, discussing with himself, I imagine, and with the actors, the work of the artist and the function of art.' She later returns to this autobiographical theme. 'Tthis time he is making a film in the theatre, scrutinising his demons, and letting yet another young, beautiful and talented actress examine the issues of life and art, of ethics and desire, of truth to the work and the possibilities of getting to its very heart.' Sörenson ends her review with the words, 'The final scene is overwhelming. The actors are caught in the silent film images projected on the walls. The actors, their own lives and their fictional lives in the theatre are embraced and inundated by these images of poetry and life. Everything is as one. Not just for pleasure.' (Translator's note - Ej blot til lyst,  'Not just for pleasure',  is the famous motto above the Royal Danish Theatre, a reminder of the serious moral function of drama)

Around this time, Bergman was announcing his intention to round off his career in the theatre, yet various projects conspired to intervene. Per Olov Enquist's play and its theme about the creative process, a theme which had occupied Bergman throughout his career, affected the director strongly. Yet this was not the only attraction. There were also strong autobiographical links between  Bergman and the characters in The Image Makers, including the fact that Bergman himself had directed Victor Sjöström in Wild Strawberries.

In an interview with Henrik Sjögren, Bergman describes his reaction on coming across the play at The Royal Dramatic Theatre:

I thought: this is something I know about, something I'm familiar with, for one thing I've met all these people, some of them are very close to me, and for another, nobody else know exactly what it looked like in the Filmstaden studios. The Phantom Carriage also happens to be one of the cornerstones of my life in the cinema. I took the play in my hand, went down to the head of the theatre (Ingrid Dahlberg) and said: 'I'm the only one who knows how this should be done. I got precisely the ensemble I wanted.'

In Ingmar Bergman's artistic life there has always been a strong interplay between cinema and the theatre. His work in both genres has had a cross fertilisation effect both in terms of theme and expression. In many of his films, the capacity of the theatre to create plausible lies and the creations of the actors at the borderline between truth and lies are a metaphor for life and the art of being human. Typical examples are Sawdust and Tinsel, The Magician, and In the Presence of a Clown. In The Image Makers, film and the issues surrounding the making of a film move into the theatre for the first time.

Bergman subsequently went on to make a television version of The Image Makers. Several critics were of the opinion that in this version, the interplay between Elin Klinga as Tora Teje and Anita Björk as Selma Lagerlöf had been further refined. The character of Tora Teje was slightly more subtle, creating a better balance between the two women and revealing further nuances in the text.