In his third staging of The Legend, Bergman placed less emphasis on theatrical effects and colourful costumes and focussed primarily on the moral theme of the play and on the cynical old member of the Ehrenstål family. 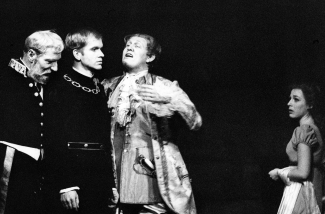 In the programme note to the Royal Dramatic Theatre production, Hjalmar Bergman's widow, Stina, told a story that might be the genesis of The Legend: At Hjalmar and Stina Bergman's summer residence on Dalarö, there was a well from which a clear spray of water emerged. The innocent young title figure in The Legend shares the purity of the water in the well.

'For many this production will be a surprise, as they get to see what a broad register Ingmar Bergman has as a director,' one reviewer wrote, adding that Bergman was one of the few poetic minds on the Swedish stage. Not everyone agreed.

Many critics have found the piece hard to characterise. Consequently, it is also hard to stage a production that does justice to all its nuances and levels. In certain parts the play has a decidedly lyrical character which, in others, is in stark contrast to a considerably more robust realism that bears witness to the author's insights into the brutality of life. The plot has the quality of a dream, a fantasy: it is a fairy tale about the light of love in contrast to the blackness of deceit.

Many commentators, Ingmar Bergman included, have pointed out the play's striking similarities with Alfred de Musset's play One Doesn't Trifle with Love.