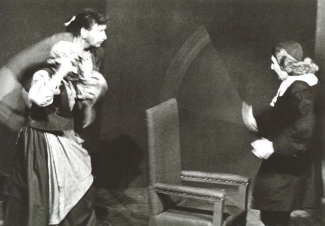 When Ingmar Bergman decided to stage The School for Wives in 1966 (premiere 22 November) at The Royal Dramatic Theatre, he also produced Critique of the School for Wives at the same time. The idea was that both plays would run on the same evening. The reason for this can be traced back to the circumstances in which Bergman had resigned from his job as head of The Royal Dramatic Theatre some six months earlier.

At that time he had expressed a certain disappointment and bitterness at the 'ignorance',  as he put it, with which he and his work as head of the reorganisation of The Royal Dramatic Theatre had been met. The discussion of the theatre presented by Molière in Critique of the School for Wives was adopted by Bergman as a fitting response to certain opinions expressed in the debates about the arts of the 1960s. The question posed in Critique and appropriated by Bergman is whether, when all is said and done, 'the greatest of all rules is to be pleasing', and if a play fails to engage its audience, then the audience itself is not to blame.

Molière asks the question, '[D]oes one mean that the members of an audience are incapable of knowing whether they have enjoyed themselves or not?' Some years later Bergman spoke about the role of head of a theatre, and his comments contain echoes of Molière. Bergman's view was that it is always a failure for the head of a theatre for the company to play to empty seats. And if there are empty seats, then one should 'concentrate on basic, real, tangible, elementary entertainment'. Without an audience, theatre is nothing more than a castle in the air, an establishment without a true raison d'être. A theatre must always be grounded in reality and 'the grounding reality for a theatre is its audience'.

Unlike Molière, who staged Critique after The School for Wives, Bergman chose to stage the plays the opposite way round. This reversal was not entirely successful: it was questioned by the critics, who in some cases were negative towards the production. Georg Rydeberg, who played Arnolphe, failed to live up to Bergman's aspirations for the role, and the actor showed his displeasure by failing to learn his lines in time.

Bo Strömstedt, writing in Expressen, described how Rydeberg's Arnolphe is increasingly stripped of his dignity. He 'stands with old age staring out from his sparse wisps of hair and one says to oneself: now I see the tragedy of the ageing man. But what I (really) see is the image of the ageing man's tragedy; and it does not move me.'

The School for Wives by Molière was first performed in 1662. Molière, along with Corneille and Racine, is regarded as one of the foremost exponents of French classical drama.

The main character of the play, Arnolphe, 42 years old and unmarried, wants a young and innocent wife. In the young Agnès he sees his wife to be. She, however, hates the thought of marrying Arnolphe, since she is in love with a younger man who returns her affections. She determines to fight back against the patriarchal order of things. After various intrigues, the young couple are united, and Arnolphe, old and ugly, draws the short straw.

The School for Wives occasioned Molière some unwanted attention. There was widespread gossip that there were parallels with himself and his private relationships and the character of Arnolphe in the play. It was also implied that the young woman with whom Molière was living at the time was, in fact, his own daughter. This talk of incest set tongues wagging, and the play was variously attacked from many quarters.

At the time, the French classical view of drama and the way it should be constructed had become more or less a doctrine. There were strict rules on obeying the unities of time, place and action, and there should always be a clear distinction between comedy and tragedy. The rigid aspects of this doctrine did provoke their own criticism, since some were of the opinion that the rules were too restrictive, concealing other eventual qualities in a drama. Molière, who already enjoyed great respect from his contemporaries as a dramatist, was one of those who was willing to point the finger at anything he considered to be a restricted and pseudo-artistic view of the theatre.

When his play The School for Wives was subjected to various attacks, Molière decided to mount a counter-attack from the stage, writing the conversation piece Critique of the School for Wives. The play is an amusing, poised and scathing satire against ignorant and snobbish attitudes to the theatre and its audiences.