Teahouse of the August Moon 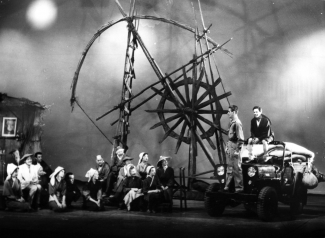 'Malmö City Theatre had really only one mission: to get people to the theatre.'
Ingmar Bergman

In Images Bergman reveals how Patrick's play came to replace, for commercial reasons, a tentative plan to set up Euripides' classical drama The Bacchae. 'We began planning but became hesitant. Malmö City Theatre had really only one mission: to get people to the theatre. So we weighed the pros and cons and cancelled the project without further sentimentality. The theatre fought for its life and this was both too big and too narrow. So then we did Teahouse of the August Moon instead.'

The production became a great popular success. The reviews were more reserved. Some called Bergman's directing 'conventional'; others felt that the farcical elements in the play were overdone, and objected to Bergman's 'primitive' use of situational comedy.