The Time and the Room

The link to Strindberg was obvious from the start, and in the programme Bergman reprinted Strindberg's brief preface to A Dream Play. 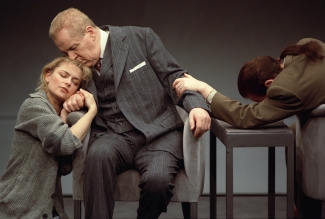 'Time and space do not exist; anything can happen, anything is possible and probable.'
August Strindberg, preface to A Dream Play

The setting showed a house façade, reminiscent of the opening in several of Strindberg's chamber plays. Reviews were mixed. Several critics found Bergman's interpretation academic and distant, though revealing an intelligent reading of the play. 'The production was only understandable to those who saw the main character, Marie Steuber, as a reincarnation of Indra's daughter in A Dream Play.'