Pär Lagerkvist's expressionist one-act play from 1918 about The Man in the Tuxedo and The Man with the Hunchback. 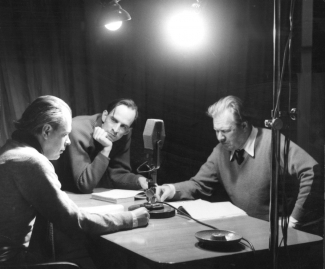 'After speaking with his dead friend, it slowly dawns on The Man in the Tuxedo that he must also approach the other side.'
From Sveriges Radio's synopsis

To honor the author, Nobel Prize winner Pär Lagerqvist, on his 65th birthday, the Swedish radio staged broadcast versions of two of his plays. One of them was the one-act The Tunnel, directed by Ingmar Bergman, who toned down Lagerqvist's expressionistic drama about two men who meet in a realm between life and death. The reviews were only brief notices.