For his first Shakespearean stage production in 27 years, Bergman asked set designer Gunilla Palmstierna-Weiss to construct the interior of an Elizabethan house in which dome players had set up a little platform, with William Shakespeare himself welcoming the audience. 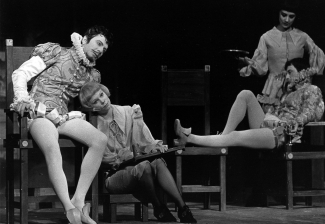 'A sterling theatrical performance, executed with an artistic vitality and scenic imagination that were entirely hynotising; a festive evening for fools by fools.'
Leif Zern, Dagens Nyheter

Bergman added an aftermath to the final scene: the different couples whirled around to music, stopped in the middle of the dance and found themselves hand in hand with the wrong partner. Music was prominent in this production with the musicians present in the music gallery throughout the play. The musical compositions consisted of a form of Elizabethan pastiche.

Twelfth Night was Bergman's last production on the Swedish stage for nine years. The following year, in 1976, he left Sweden because of an apparent 'tax affair'. He returned to the Swedish stage and The Royal Dramatic Theatre with another Shakespeare play, King Lear.

Poland, Warsaw, Theatre of Nations, 14-17 June 1975.
There were three sold-out performances. Polish reviewers...maintained an awesome respect for Bergman whom they elevated to a philosopher of rank, seeing his production of Twelfth Night as 'one more piece of material in his existential search'. (Balicki)