Unto My Fear was the second play Ingmar Bergman directed in Gothenburg, which he had also written. 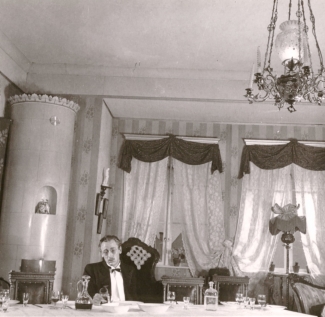 'This reviewer is in deep disagreement with Ingmar Bergman in almost all matters concerned.'
Ebbe Linde in BLM

The play contains autobiographical features, as well as themes taken from his other works.

Bergman published a short essay entitled In grandmother's house in the programme note. Here he paints a picture of his grandmother's apartment in the university town of Uppsala, reminiscent of the setting for his film Fanny and Alexander made 35 years later.

Reviewers were struck by Bergman's hectic work tempo and prolific production. What is also noticeable in these reviews is the difficulty critics had with Bergman's splendid view of life and his main character's defeatist personality.

Some critics thought that Bergman had matured as a writer and that his time of apprenticeship was behind him. Others, such as influental critic Olof Lagercrantz, thought of Bergman's play as juvenile and 'not worth the make-up used on opening night'.

In Arbetaren Juvenalis pointed out Bergman's difficulty ending the play. 'It is as if the last pages of the manuscript had disappeared. The audience returned home, as disillusioned as the author.'

A. Gunnar Bergman, writing in Afton-Tidningen, was positive of Bergman's work, drawing parallels between him and Ibsen, aboveall to Peer Gynt. His review ended with, 'We expect big things from Ingmar Bergman. His apprenticeship is behind him. It is now time to present him on the Stockholm stage. Let us hope that Böjgen doesn't get him first.'

The main character in Unto My Fear is Paul, a young, talented writer of metaphysical-oriented fiction. The story covers nearly 20 years of his life. Pressured by his editor to write more popular works, he soon begins to compromise with his artistic vision and thereby is doomed. By the end of the play he has left his innocent fiancée Kersti for the common and sleazy Irene. The play begins in the apartment of Paul's grandmother, an archetypical character of total evilness (an early study of the mother of Isak Borg in Wild Strawberries) whose mere presence brings unhappiness and self destruction. Her opposite is Mean, the good fairy who dominates the first act of the drama, when things are still good between Kersti and Paul and Paul is still a promising young author.