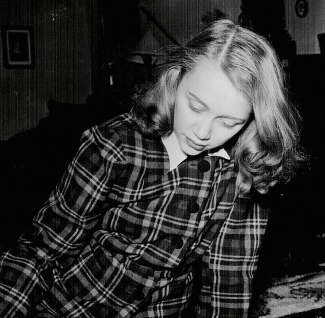 Dancer, choreographer, director and writer, Else Fisher worked with Bergman at the beginning of his career and was married to him between 1943-45, with whom she had daughter Lena.

Born 1 March 1918 in Melbourne, Australia, Else Fisher’s parents were textile artist Eivor Fisher and engineer and entomologist Ejnar Fischer. In 1922, the family, which also consisted of Fisher's sister Randi, moved to Stockholm.

From an early age, Fisher wanted to be a dancer, encouraged by her mother (her father having passed away in 1929). In 1939, she received a degree in dance, and competed in the international dance competition in Brussels along with three other solo dancers, where she took home fifth prize. World War II put a halt to her career as an internationally touring dancer, and Fisher instead made a living with temporary work as a dancer and choreographer.

Fisher first met Bergman in 1941, when she worked with his staging of Bluebird at Stockholm's Sagoteatern, where Bergman was head. In 1942, she wrote Beppo the Clown, which she also directed, choreographed and starred. Beppo was a hit and played on numerous Swedish stages, including at the Royal Dramatic Theatre in 1948 and 1956.

Fisher worked as the choreographer in Bergman’s stagings of Death of Punch, A Midsummer Night’s Dream, A Beautiful Rose, and Niels Ebbesen.

Fisher and Bergman not only maintained a professional relationship but also became personally involved. They were married in March of 1943 in Stockhom. At this time, Bergman had recently been given a job in the scriptwriting department at the Swedish Film Institute, where he was writing Torment, a story about his schooldays. Their daughter Lena was born in December of the same year.

The family was about to move to Helsingborg, where Bergman was appointed as the head of the city’s failing theatre, and Fisher had been engaged as head of choreography. In the spring of 1944, however, both Else and Lena were diagnosed with tuberculosis and Bergman moved to Helsingborg (some 600 kilometres from Stockholm) by himself. Fisher recommended her former schoolfriend Ellen Lundström, as a replacement in her position at the theatre. Bergman and Lundström became romantically involved, and Lundström fell pregnant. Around Christmas, just as Fisher received medical clearance to return to work, Bergman announced he wanted a divorce. Fisher and Bergman did however work together again in 1957, when Fisher did the choreography for The Seventh Seal.

Fisher spent the first three years after leaving Helsingborg at Norrköping’s City Theatre, and then went on to head up the Skolteatern (children’s theatre) in Stockholm, paving the way for her to write and direct new performances, including Fantasilådan (1947) and Bygga hus (1952). In 1957, Fisher wrote Porslinsfröken for television, the only adult piece she ever wrote. In the summer of 1945, Fisher pubished Clownen Beppo as a book, which she followed up three years later with children’s book Udda Person.

In 1957, Fisher was elected into the Swedish Writer’s Guild, where she quickly became secretary and treasurer, positions she held for about a decade.

Fisher passed away on 3 March 2006 in Stockholm.