For his first staging as the newly-appointed theatre manager at the Helsingborg City Theatre, Bergman chose a play written by a local as a friendly nod to his audience. 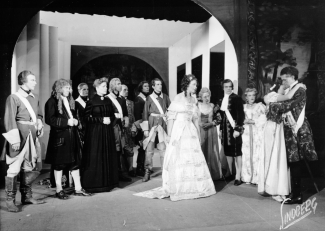 The head of Dramatikerstudion (Playwrighters' Studio) in Stockholm, Brita von Horn, recommended Bergman for the job of theatre manager in Helsingborg, but had no inkling that he would take half of the company with him when he went. Bergman attempted to heal the situation when he chose to stage The Ascheberg Widow at Wittskövle as his first play.

The play was written by Elsa Collin and von Horn, based on a novel by the former. According to von Horn, Bergman was furious when he found out that Dramatikerstudion was going to stage their premiere before Helsingborg City Theatre put on theirs. Dramatikerstudion premiered the play on 6 September, with Naima Wifstrand in the cast, whilst Helsingborg City Theatre premiered it on 21 September 1944. Von Horn attended the Helsingborg premiere and they settled their differences.

Inevitably, several critics compared the staging to von Horn's Stockholm production and found it superior, foremost for Bergman's cuts in the original text to achieve greater dramatic stringency. Also noted were such features as his playful approach, his intention to acoustic details and his sense of rhythm.