After contemplating The Bacchae for nearly 40 years, Bergman finally staged Euripides' drama for the theatre. 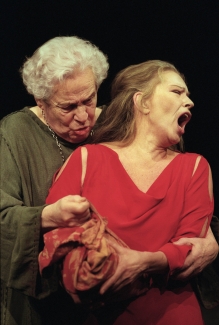 'Nothing I have seen by this almost 78-year-old director has moved me so right down to my bare bones.'
Leif Zern, Dagens Nyheter

For his Royal Dramatic Theatre version of The Bacchae, Bergman used the minimalist Målarsalen stage which was made to look like a black box with a simple grey platform serving as acting space. In the short performance, barely two hours, Bergman's focus was on the spoken text and stylized movement of the actors, directing the individual performers to use a certain emotional restraint as a counterpoint to the ecstatic and violent rhythm of the chorus of Bachantes. Pentheus often turned his back to the audience, while Dionysos suddenly appeared in their midst.

Bergman's decision to retire at the end of the 1995-96 seasons may have been both personal and professional. He had lost a vital support when his wife of 24 years died in the spring 1995. But the main reason for leaving The Royal Dramatic Theatre probably had something to do with the controversy over Bergman's The Misanthrope production and the stand taken by the head of The Royal Dramatic Theatre, Lars Löfgren.

The reception was unanimously enthusiastic with critics speaking of a production worthy of a divinely gifted magician and master of the stage. One reviewer compared the production to Bergman's films from the '50s, especially The Seventh Seal, 'a medieval midnight mass'.