With Macbeth, Bergman proved his mettle and began to figure in the press as a cultural personality in Helsingborg. 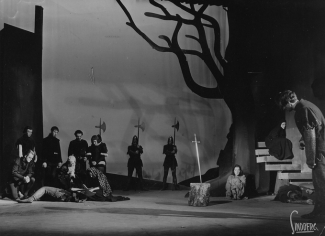 'What a bash we had staging [Macbeth] down in Helsingborg.'
Ingmar Bergman

In Bergman's first production, the medieval mood painting had been essential. In his second production, he 'updated' Shakespeare's tragedy (the setting was now early Renaissance rather than the dark middle Ages), and called it an anti-Nazi drama featuring a murderer and a war criminal. The programme note concluded, 'We must have faith'. A bloody Christ figure hung above Lady Macbeth's quarters and her post-murder reaction pointed to the possibility of a religious conversation. Bergman referred to his version of Shakespeare's drama as both a 'thriller' and 'religious service'.

Reviews were astounded by the spectacle Bergman had achieved on a stage with limited technical facilities. His Helsingborg Macbeth was a richly orchestrated production, in which the visual and musical effects were especially notable, reminding some critics of Bergman's past training at the Royal Opera in Stockholm.