Time restraints bogged down the preparations for Bergman's first staging of The Misanthrope, with Max von Sydow as Alceste and Gertrud Fridh as Célimène. 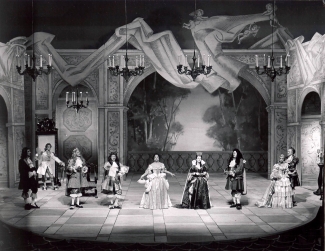 'An absolute high point in Swedish theatre in the last 50 years.'
Henrik Sjögren

Bergman placed only four black chairs and canapés on a chequered marble floor - like a chessboard - against an autumnal tapestry-like backdrop. The only scene changes consisted of two servants moving the chairs around. Max von Sydow's mask, with its thin black moustache, reminded some commentators of Molière. The mask was similar to Vogler's in The Magician.

The critical tributes to Bergman's The Misanthrope production culminated in Henrik Sjögren's review, in part written as an official thank-you to the director:

TO INGMAR BERGMAN: my admiration and gratefulness for The Misanthrope. As far as I understand it, this is the most ingenious staging, the fiest, richest, and most sensitive production that Malmö City Theatre has ever shown.

With his The Misanthrope production, essential features in Bergman's stagecraft became cemented in the critical evaluation: clarity and balance; musical timing of dialogue, coupled with precise movement of the actors; and careful attention focused more on Bergman's ability to present a splendid and cohesive feast  for the eye than on his character and theme analysis. This was a marked contrast to the reception of his filmmaking with its focus on thematic.