The Three-Penny Opera was Bergman's first staging of Bertolt Brecht and was hailed a cause célèbre. 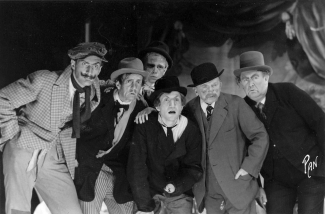 'What a miserable compromise, a parody with big ambitions, a cowardice, a treachery against a conquered insight.'
Ingmar Bergman

In a program note to the production, Ingmar Bergman dates his first acquaintance with Weill's music to the summer of 1933, when he listened to the classical Lotte Lenya sing Jenny's ballad to the accompaniment of Lewis Ruth's band. It took some time before Bergman encountered Brecht's text, one reason being that it had been confiscated by the Nazis. Later, when reading the play, he was disappointed and repelled by its dry and matter-of-fact mixture of farce and tragedy. Brecht's cool objectivity towards his painful story bothered Bergman.

The critical divergences were so strong one might wonder if the reviewers actually watched the same performance.
The real problem with the production seem to have been similar to Bergman's staging of Camus' Caligula in Gothenburg a few years earlier. Two strong but divergent wills, Anders Ek and Bergman, imposed their artistic ambitions on Brecht's work.