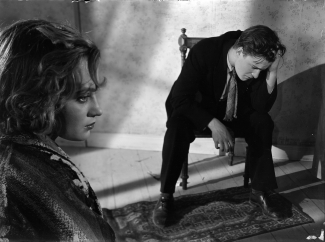 "The small film crew threatened to walk off the set and go home. I screamed and swore so loudly that people woke up and looked out of their windows. It was four o'clock in the morning."
Ingmar Bergman in Images

On 16 January 1943, Ingmar Bergman took up a job with Swedish Filmindustri as 'assistant director and screenwriter' on a one-year initial contract. During a lengthy spell in hospital and a subsequent period of convalescence during the winter of 1942–43, he wrote the screenplay for Torment, for which SF bought the rights in July 1943 within the framework of his contract. One condition of this was that Bergman should re-write certain parts of the script.

Filming, in which Ingmar Bergman took part as assistant director and script boy, took place in two stages. The first, covering interior scenes, was from 21 February to 31 March 1944. The second period, for the exterior scenes, comprised just ten days in late May of the same year. It was when filming these exteriors that Bergman actually made his film directorial debut.

When the film was virtually done, I made my debut as a movie director. Originally, Torment ends after all the students have passed their final exam, except for one, played by Alf Kjellin, who walks out through a backdoor into the rain. Caligula stands in the window, waving good-bye. Everybody felt that this ending was too dark. I had to add an additonal scene in the dead girl's apartment where the principal of the school has a heart-to-heart talk with Kjellin while Caligula, the scared loser, is screaming on the stair below. The new final scene shows Kjellin in the light of dawn. Walking towards the awakening city.

I was told to shoot these last exteriors, since Sjöberg was otherwise engaged. They were my first professionally filmed images. I was more excited that I can describe. The small film crew threatened to walk off the set and go home. I screamed and swore so loudly that people woke up and looked out of their windows. It was four o'clock in the morning.

Torment provoked intense debate in the press. Aftonbladet published a letter from Henning L Håkanson of the Palmgren School where Ingmar Bergman had been a pupil (the statement referred to in the following quotation was made by Bergman and published the day after the premiere of Torment, on 3 October 1944).

Mr Bergman's statement, that his entire time at school was hell, surprises me. I clearly recall that he, his brother and his father were all very satisfied with the school. After his final examinations, Ingmar Bergman came back to school to attend our Christmas party, bright and cheery as far as one could tell, and not seeming to harbour any grudge, either against the school or its teachers. In all probability, the fact of the matter lies elsewhere. Our friend Ingmar was a problem child, lazy yet rather gifted, and the fact that such a person does not easily adapt to the daily routines of study is quite natural. A school cannot be adapted to suit bohemian dreamers, but to suit normally constituted, hard-working people.

Let us start with the '12-year hell' (coarsely expressed, by the way. Not a word used by me, but by the person who interviewed me. I recall using a milder term, which is somewhat different). Indeed… I was a very lazy boy, and very scared because of my laziness, because I was involved with theatre instead of school and because I hated having to be punctual, having to get up in the morning, do homework, sit still, having to carry maps, having break times, doing tests, taking oral examinations, or to put it plainly: I hated school as a principle, as a system and as an institution. And as such I have definitely not wanted to criticise my own school, but all schools. As far as I understand it, and as I clearly pointed out in that unfortunate interview, my school was neither better nor worse than other institutions with the same purpose.

There are teachers one never forgets. Men one liked and men one hated. My revered headmaster belonged and still belongs (in my case) to the former category. I also have the feeling that my dear headmaster has not yet seen the film. Perhaps we should go and see it together!

One thing is certain: no story has ever been told more intensely in Swedish cinema. Long sections of Torment are hair-raising. […] The young man of the theatre, Ingmar Bergman, has written Torment. He must be a film talent! Visual narration comes naturally to him, the screenplay has focus, rhythm and vigour.

Here, Sjöberg has been forced to concentrate as a narrator, and this adds to the powerfully dramatic impact of the film. Ingmar Bergman's screenplay is, to use the language of the film, somewhat 'schoolboyish' in its obvious portrayal of the malevolence of the Latin teacher and the young girl's undoing. Yet in combining both these points of vexation in the life of the young student, the story gains both in concentration and in effective contrasts, paving the way for dramatic outbursts that are carefully preserved in the direction.

In purely cinematic terms, a more skilful Swedish film has never perhaps been made, and seldom one more dramatic. The film has virtually no weak spots, but is full of vigour from start to finish.

Ingmar Bergman made his screenwriting debut with this tale of sex, passion and murder. A sadistic Latin teacher, nicknamed Caligula by his long-suffering students, takes particular pleasure in tormenting one pupil, the diligent Jan-Erik. But Jan-Erik has more on his mind than appeasing the professor: he's deeply involved in an affair with Bertha, an older woman with a taste for both men and liquor. Despite her unfaithful ways, Bertha falls in love with Jan-Erik and tells him that she's fearful of a stranger who seems to be following her everywhere. Then, one day, Jan-Erik enters Bertha's apartment only to discover her dead... in Caligula's presence. The grieving adolescent accuses Caligula of murder. But with no proof, it's a statement he may come to regret. The myth, the man

Ingmar Bergman's life and work are hard to differentiate, and that's putting it mildly.