The Winter's Tale was planned as a farewell to theatre and was reviewed as such, when Bergman re-staged The Misanthrope for the third time just a few months later. A farewell would have to wait. 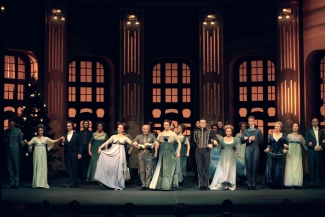 'Which of my productions do I hold closest to my heart? - The Winter's Tale, standing in a class all its own. It is the production I am most grateful and happiest for, the most meaningful.'
Ingmar Bergman

Bergman's 1994 Dramaten production of the play was the third one in Sweden in a short period of time but also the boldest in terms of conception and handling of Shakespeare's text.

In a self-styled interview, Bergman mentions having been fascinated by The Winter's Tale as early as 1932, when he was experimenting with his puppet theatre.

The critical consensus was that Bergman's personal vision had entered into a happy union with Shakespeare's fairy tale drama. As Leif Zern was quoted in Dagens Nyheter, 'Ingmar Bergman's staging of Shakespeare's The Winter's Tale on The Royal Dramatic Theatre's main stage has all the prospects of becoming the same kind of popular feast as Fanny and Alexander was.

The critics had different views on the performance. One of the praising critics wrote that Shakespeare in fact must have been a Swede. 'Why else would he seem so much more understandable in that language? It's Shakespeare seen through the prism of Strindberg which would seem odd, if it weren't also utterly Shakespearean.' Another review spoke of the performance as 'simply and purely theatrical, a celebration of the art of the stage.' The most sour critic wrote that Bergman 'suffered from AMS, i.e. Aging Master Syndrome'.

The performance was also invited to London and the Barbican Centre but Bergman declined because of the stage's size, which he thought would kill the atmosphere of his The Winter's Tale.