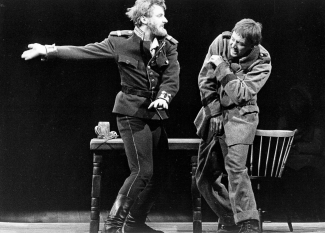 'The audience was drawn into the drama which stretched between two opposing poles: Büchner's text and contemporary - late 1960s - society.'
Henrik Sjögren

Bergman's production of George Büchner's Woyzeck was a crucial step in his conception of the symbolic relationship between stage and audience.
At a press conference on 16 January 1969, he displayed - along with set designer Marik Vos – a stage model of a specially designed arena theatre to be built on The Royal Dramatic Theatre's Main Stage with seating for 150 spectators.

After some 20 rehearsal sessions in a special studio at the theatre, the ensemble continued rehearsing on the arena stage on 20 February 1969, at which time theatre students, critics and other professionals in the field were invited to attend.

Critics were told they could write about the production at any time and talk to the cast but had to show respect for the work rules set down. Open rehearsals continued for a month. They took place twice a day, at 11am and 1pm.

Staging Woyzeck with open rehearsals might have been an attempt by Bergman to respond, in a professional rather than political way, to demands by young Swedish drama groups to make the theatre a more open and democratic institution.

The overall press response to Bergman's disciplined type of direction and his formal aestheticism was, to some, his version of Woyzeck resulted in a beautiful performance; to others it was too controlled and right. In Expressen, P O Enquist commented, 'Everything feels polished but conventional; spotless but spineless.

The critic of Sydsvenska Dagbladet headlined his review 'Bullying à la Bergman' and implied that the diminished acting space and lack of props were solely means for Bergman to control his actors.

I have never seen Bergman work more openly than here [...] I experience his production as very liberating, very present [...] It is personal but not at the expense of the material, and it is born out of a collaboration between text, direction, and actors that is unique in our country.