Ingmar Bergman commanded the theatrical diversity in Strindberg's drama and produced one of his most remarkable plays, which nevertheless met with a cold response in Berlin. 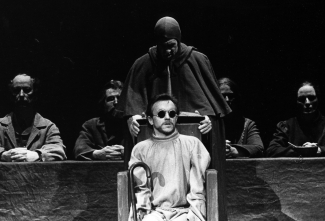 'Presently one can scarcely imagine a more proficient, competent production. Bergman knows what he is doing and does it with absolute confidence.'
Åke Janzon, Svenska Dagbladet

Strindberg's 'station drama' in three parts from 1898 and 1901 depicts the spiritual journey of a man called The Stranger. The title of the play is a reference to the conversation of the Biblical Apostle Paul en route to Damascus. Bergman chose to combine Parts I and II of Strindberg's play, he cut the text extensively and toned down its religious implications to present a human relationship drama.

More and more the critical responses to Bergman's stage productions expressed enthusiasm for his professional skills and imaginative craftsmanship, while criticism often focused on the reviewer's preconception of the text of the play and the degree to which Bergman remained loyal or sensitive to it.

Germany, Berlin, 27-28 September 1974, during Berliner Festwochen
The German critics had expected to be met with 'a Bergman sensation', but were disappointed by what they considered to be a 'restrained', 'dull' and 'wordy' production.