Bergman's sole production of a Strindberg historical drama was a step beyond his mastering of the same stage in The Crown Bride. 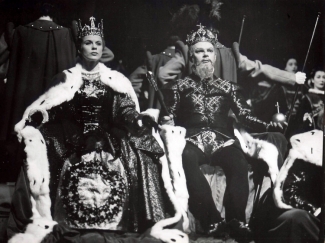 Bergman's approach was to stylize the setting in Strindberg's historical drama and minimize stage conventions. There were no specially constructed interior or exterior sets, no rotating stage, and no curtain. The only décor was an immense vault that spanned the stage and could be lowered and raised by a simple mechanism. Bergman did not cut a single line from Strindberg's text but added new dramatic vignettes, such as a vampire-like courtly ballet and the appearance of a substitute king at Erik's and Karin Månsdaughter's wedding, dressed like a woman but wearing a huge white beard.

The reviews of the Erik XIV production were sharply mixed, a great many of them highly critical, calling Bergman's approach an unfortunate return to an earlier, more excessive directing style.

At the other end of the critical spectrum were views like who nominated Bergman as Olof Molander's heir as a director of Strindberg, and who concluded ambiguously: 'In sum, it is a production one could probably cope with seeing seven times a week'.