It Rains on Our Love

A newly-released prisoner and a confused girl meet at a railway station and attempt to start a new life in a cottage on an allotment. 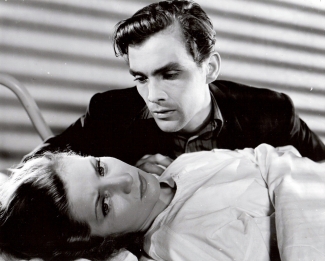 "Bear in mind that Birger Malmsten is no Jean Gabin and most of all you are no Marcel Carné."
Lorens Marmstedt to Bergman during the shooting

Ingmar Bergman writing on the genesis of the film in Images: My Life in Film:

A few days after the premier of Crisis, the telephone rang. It was Lorens, saying: 'Dear Ingmar. That was an awful film! Hard to imaging anything worse! I suppose your phone is ringning off the hook with offers'. Lorens Marmstedt was an independent producer with a small but well-regarded production company, Terrafilm. He had just been saked by Karl Kilbom, of Sweden's Folkbiogrefter Company, to produce two films. The first project was a Norwegian play called Good People by Oscar Braathen. Herbert Grevenius was the foremost theater critic of the 1940s, and we were good friends. He was the driving force behind the decision to maka me the head of Helsingborg's City Theater. He was also the one who, in 1946, through his connections with Torsten Hammarén, opened the doors for me to Gothenburg's City Theater.

I had read Herbert's screenplay and found it rather tedious. Lorens Marmstedt agreed and asked me how much time it could take me to rewrite it. I promise to do it over the weekend if I was provided with a secretary.

According to Bergman himself, the shooting gave him some hard but valuable lessons. Writing in Images:

Lorens was a harsh teacher. He was ruthlessly critical and forced me to reshoot scenes he found poor. He could says: 'I've been speaking with Hasse Ekman, who has seen the rushes, and I've had spoke to Kilbom. I must keep things open! It may well be that you won't be allowded to finish shooting. Bear in mind that Birger Malmsten is no Jean Gabin and most of all you are no Marcel Carné'. Lamely I try to defend myself by pointing out some scenes I thought were pretty good. Then Lorens looked at me with his icy light-blue eyes and said: 'I don't understand how you can wallow in this simmering self-satisfaction!'.

And he goes on:

I raged; I was desperate and humiliated; but I had to admit he was right. Every day he took the trouble to sit through the rushes. Even though he criticized and insulted me in front of the staff, I had to take it, since he was participating passionately in th birth and development of the film. I cannot remember that he praised me even once during It Rains on Our Love for anything I had done. What he did do was give me a lesson. He said: 'When you and your pals see the dailies, you're in a state of emotional chaos. No matter what, you want everything to be good. That's the reason you have a natural tendency to make excuses to your failures and overstimate what you are seeing. All of you are supporting one another. This is normal, but it's also dangerous. Submit yourself to a psycological excercise. Don't be enthusiastic. Don't be critical either. Put yourself at point zero. Don't let your emotions get involved in what you're seeing. Then you'll see everything.' This piece of advice has been invaluable to me throughout my professional life.

The general tone of the reviews was summed up by Stig Almqvist writing in Aftontidningen: "A breath of fresh air in Swedish cinema. So longed for, so welcome!"

He will receive more praise for It Rains on Our Love. But this time it is well deserved. It is amusing to study Ingmar Bergman's development from Torment to It Rains on Our Love. In Torment the agony of puberty burst out in anguished screams. But it was also infused with the young man's irresistible desire to shock. That is something, incidentally, that permeated most things that Ingmar Bergman has done previously – sensation for sensation's sake.

And, as we know, Ingmar Bergman is a young talent with ideas all of his own, as witnessed both in Torment and Crisis. But in those he was fairly wound up, not always sure of his means of expression, schoolboyishly exaggerated, dreadfully angry and rather violent, not particularly intelligible. In It Rains on Our Love he reveals himself as a film narrator of a different kind, lyrical, charming, playful, artistically assured yet clearly not intent on breaking windows and causing a scene.

Maggi: What do you think of me?
David: I don't think at all. I haven't got round to that.
Maggi: Your average bird who takes off with the first good guy she meets?
David: It wasn't the first guy, but it happened to be the best one.
Maggi: You were so eager. Who are you really? Your hands are so white.
David: I'll tell you some other time.

Man with umbrella: Nice place, don't you think? Quiet and cosy. You had a job, food on the table, and a bed. You had a girl who was quite special, all things considered. But your self-esteem.
David: Some other time, okay?
Man with umbrella: Sure. Sure. It's so bloody complicated.

Prosecutor: I feel that society must protect itself against individuals like these two. At the same time, society must help protect these two from themselves. It is our duty as Christian, humane and enlightened to do so.

Man with umbrella: That's what this whole business is all about. It's about two people who would say, 'Nothing concerns us', because they've been told that, 'You're no concern of ours'. On the other hand, we have their love for one another. Their willingness to adapt. Their effort, albeit awkward, to fit into society. We should look upon that with favour.

Two young people try to protect a fragile love relationship on the margins of society against all pressures from established social institutions and their representatives. Although It Rains on Our Love is perhaps the most schematic of Bergman's early films about adolescents in crisis, with the guardians and adversaries of young love appearing in near-allegorical form, it is also the least tortured. The scenes of idyll and refuge for persecuted young lovers, more fleeting and vulnerable in his other films, here have a warmth that contemporary Swedish critics greeted with positive relief after the "distorted sexuality" of Crisis earlier that same year. The good-father/bad-father dichotomy that will mark much of Bergman's production is resolved here by having the compassionate narrator enter the action of the film as the couple's defense attorney in the final trial scene. An overall tone of naiveté peppered with burlesque irony makes this one of the most optimistic of his early films.