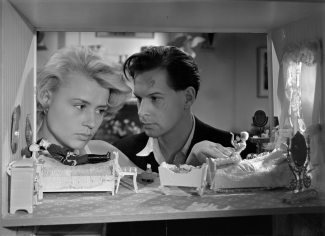 " [...] one notes that Ingmar Bergman, with the position he now occupies, no longer gives away his best screenplays."
Nils Beyer in Morgontidningen

In a report from the shooting of the film in Stockholms-Tidningen on 18 May 1955, Loke wrote about the genesis of the screenplay for Last Couple Out:

The film is not a new story, cobbled together by Bergman during what is reputed to be a secret "exile" to the Park Avenue Hotel in Gothenburg. A screenplay was completed back in 1951, since when it has been discussed and re-written (a relative term in the film industry) a couple of times. Just a few months ago SF asked Alf Sjöberg if he would like to direct it  and he his response was 'yes'. Ingmar Bergman subsequently gave the script a final once-over. 'Just like Torment,' Alf Sjöberg explains, 'this was another screenplay that was waiting in the wings'.

Reviews were mostly negative. Writing in Morgontidningen, Nils Beyer observed that 'one notes that Ingmar Bergman, with the position he now occupies, no longer gives away his best screenplays. The concept for Last Couple Out is probably an old one that he once laid aside but has now tried to lick into shape. In any case, it seems to belong to an earlier phase in his development.'