Bergman read Schiller's preface to the play, in which the playwright states that the roles of Elizabeth and Mary Stuart should be cast by women in the mistress category and not in the queen category, women who are political rivals but above all women who can be swept away by passion and love. 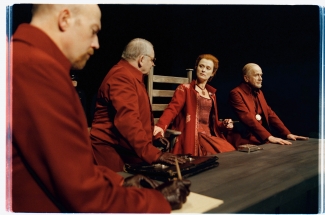 'Bergman's female drama seems to be a play within the play, which we could not do without. The rest doesn't quite reach that mark.'
Leif Zern, Dagens Nyheter

Bergman's first staging of a Schiller play was also the first production of Maria Stuart in a long time on any Swedish stage. Bergman got the idea to set up the play when he came to a performance of Swedish playwright Kristina Lugn's 1998 production of Nattorienterarna (Night Briefers). There may have been other professional reasons for Bergman's late interest in Schiller. As a classical playwright in the German theatre, Schiller holds the position of a Molière in France and a Shakespeare in England. For years Bergman had empathized the importance of keeping a theatre tradition alive and had obviously had an ambition to inscribe himself in that tradition, both nationally and internationally.

Working for many years during his exile within a German cultural context may have prompted him to take up a play by Schiller. But Schiller also represents an artistic temperament that complements Bergman's own. Though lacking the theatrical playfulness of Molière and Shakespeare, which obviously attracted Bergman, Schiller nevertheless combines two important features in Berman's vision: a strong moral voice and a sense of the importance of aesthetics to convey that voice. Like Schiller, Bergman's aesthetics seldom become an art for art's sake feature but is a tool used to reveal a basic approach to life as art by showing their interdependence, the theatre functioning as a mirror of human conflicts, a forum for man's ethical obligations, which also includes the role and function of art.

The reviews could easily have become entirely focussed on the two star performers, Lena Endre and Pernilla August. In fact, the critic in Frankfurter Allgemeine felt seduced by the two superb actresses who were said to have turned a musty old German classic into a modern theatrical display. Yet to several critics, Bergman was not building a sacred monument to himself but to the theatre as a holy art. To them his perfectionist aesthetic and intertextual references had a justifiable purpose: to suggest that Schiller's moral conflict, embodied in each of the two queens and ending in Mary's long confessional farewell and in Elisabeth's total abandonment, was also a hymn to the theatre as a blessing and a place of human consolation and atonement.

USA, New York, Brooklyn Academy of Music (BAM), 13-16 June 2002
One critic saw a connection between Persona and Mary Stuart in the melting together of the two women as they became consumed by passion. Otherwise the reviews were more courteous than warm. Some thought the historical subject was 'not exactly a sizzling topic'.