The Passion of Anna

A loner living on an isolated island begins a relationship with a married woman in Bergman's "first true color film". 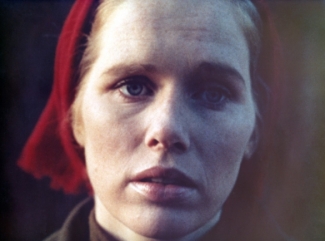 "[W]ithin the narrow confines of the chamber play, Bergman is still the only master in Swedish cinema."
Jurgen Schildt in Aftonbladet

Memorable and noteworthy from this chamber play is the fact that the four leading actors appear in special takes, one at a time, commenting upon their characters' mental state, an interview style Bergman probably borrowed from Godard's La Chinoise. Interrogator is Bergman himself. His first question is addressed to the film's leading actor, von Sydow, in the fourth take:

'Max, as an actor, what is your personal view of Andreas Winkelman?'

Max von Sydow: 'He is awfully difficult in one way, because he has tried to hide from the world around him. His unhappy marriage and his legal worries have driven him to a blind alley where he tries to conceal his identity. He tries to wipe out his means of expression, so that, without being aware of it that hiding place has become a prison. The hard thing to me is to try and express a lack of expression.'

Writing in Images: My Life in Film:

The four leading characters in the film use Johan (Erik Hell) as a accomplice in their game. There exists a parallel between Johan and the fisherman Jonas in Winter Light. Both become victims of the characters' paralysis and inability to engage in human emotional experience. My philosophy (even today) is that there exists an evil – and humans are the only animals to possess it. An evil that is irrational and not bound by low. Cosmic. Causeless. Nothing frightens people more than incomprehesible, unexplainable evil.

The film was shot on Fårö during the autumn of 1968. Bergman writing in Images:

The filming of The passion of Anna took forty-five days and was quite an ordeal. The screenplay had been written in a white heat. It was more a description of a series of moods than a traditional, dramatic film sequence. Ordinarily, I solved any anticipated technical problems immediately in the writing stage. But here I chose to deal with the problems during filming. To some extent this decision was made because of a lack of time, but mostly I felt a need to challenge myself.

The passion of Anna was also the first true color film Sven Nykvist and I did together. In All these Women we had filmed in color according to the established rules. This time we wanted to make a film in color as it had never been done before. Contrary to our usual collaborative experiences, we found ourselves in endless conflicts. My intestinal ulcer acted up, and Sven had vertigo. Our ambition was to make a black-and-white film in color, with certain hues emphasized in a strictly defined color scale. It turned out to be difficult. The color negative exposed slowly and demanded a totally different lighting than it would today. The poor result of our efforts confused us, and, regretfully, we argued often.

It was also 1968. The seeds of rebellion from that year began to reach even the crew at Fårö. Sven had an assistent photographer with whom we had worked on several earlier films. He was a short man with round glasses, like a militar serviceman. Nobody had been more diligent and industrious than he. Now he was transformed into an active agitator. He called us dictator and that all artistic decisions should be made by the whole crew. I declared that those who did not like our way of working could return home next day with their salaries intact. I was not going to change my method and schedule of shooting and did not intent to accept artistic decisions from the crew. Nobody wanted to go home. I saw to it that our agitator was assigned to ohers duties, and the filming of The Passion of Anna continued without any futher protest meetings. The filming, however, became one of the worst I have ever experienced, equal to This can't happen here, Winter Light, and The Touch.

United Artists was the company responsible for international distribution of The Passion of Anna. The Swedish newspaper Expressen was far from happy with the company's marketing: 'Despite their new style of language, the same old clichés are being trotted out: A film from Sweden  that nation of suicidal sex addicts who find the temperature cold outside but all the more warm in bed.'

Screened outside the competition at the 1970 Cannes Film Festival, the film was very positively received by the French critics. In April that year Bergman had been awarded a special prize by the catholic jury at the International Film Weeks in Valladolid, Spain, an event to showcase films of special religious or universal human interest. He also received an award for screenwriting.

No doubt there will be those who say that The Passion of Anna is not interesting because it is private or esoteric, because it take place on a barren island and has nothing to say about the Swedish mainland as it appears in Vilgot Sjöman's [...] films, which are determined to root around in the social reality around us, all of them stimulating and important because they help us to look outwards and to detect the shadowy side of the welfare state. But the dark night of the soul can never be an uninteresting phenomenon, and the fragile ability of human beings to live with one another [...] can never be removed from the world map of art, except possibly by Mao.

It is the latest thing in certain circles to scoff at the phenomenon that is Ingmar Bergman, to regard him as passé and out of sync with the times. In short, to count him out and to be on the lookout for new attractions. If we disregard the element of fashion in this view  including the opinion that professionalism is distasteful  it is of course a fact that Bergman is not an artist who changes his style without due cause. Yet neither do Godard, Buñuel or Antonioni. And who wants to force them to do so? [...] So let us leave modernity at that, and record a personal view: that within the narrow confines of the chamber play, Bergman is still the only master in Swedish cinema.

Ingmar Bergman, the director: Max, as an actor, what is your personal view of Andreas Winkelman?
Max von Sydow: He is awfully difficult in one way, because he has tried to hide from the world around him. His unhappy marriage and his legal worries have driven him to a blind alley where he tries to conceal his identity. He tries to wipe out his means of expression, so that, without being aware of it that hiding place has become a prison. The hard thing to me is to try and express a lack of expression.

Eva: What does a cultural centre involve?
Elis: It is a mausoleum over the utterly meaninglessness in which people of our kind live.
Anna: But why do you make fun of it? Why do you build a cultural centre that you dont believe in? Why not do something you believe in, which is true inside yourself?
Elis: Then I'd be idle. What about you?
Anna: I try to busy things I believe in. To live in line with some form of truth.
Andreas: How do you know which is right?
Anna: People feel what is true and what is right. We fail, but I think we should strive for spiritual perfection.
Elis: Do you often fail?
Anna: I have not failed living in a relationship with the man I was married to. Do you know why I didn't fail? Because we lived in harmony, because we were truthful and honest. We believed in each other. If I'd treated marriage the way you treat your cultural centre, I wouldn't have had happy memories. I wouldn't have had anything to believe in.

Elis: To Anna, he was a disaster. Here you are.
Andreas: Thank you.
Elis: She loved him to the point of madness. I've never seen anything like it. Maybe I have read about it.

Elis: At one time I collected only pictures of violence and acts of violence. Here you have people asleep with the subsection dead people. As you see, I have catalogued according to behaviour.

Elis: I don't imagine I reach into the soul with this photography. I can only register an interplay of forces, large and small. You look at this picture and imagine things. All is nonsense. All play, all poetry. You can't read another person with any claim to certainty. Not even pain always gives a reaction.

Eva: What is it? Why do you look angry?
Elis: It's always trifles that make me furious.

Eva: Now you can see how ugly I am. Look at me, Andreas. Have you ever been to bed with a more dreary love partner? Say Im wrong.
Bibi Andersson about Eva: She's no one  just what other makes her be. She can never get any rest or know her own worth. I think she will try and commit suicide. But suicide isnt really a solution. Its yet another selfish action. I hope they manage to save her.

Bibi Andersson about Eva: I think she will choose to be a teacher for the hearing-impaired. Because deaf people live in even deeper isolation. I think she'll come to feel an enormous sense of relief and be blessed.

Andreas: You're only praying for yourself.
Anna: Go away. Leave me alone.
Andreas: Goddamn lousy acting. Goddamn acting.

Andreas: It's terrible to be a failure. People think they have the right to tell you what to do. Their well-meaning contempt. That brief desire to trample on something living.
Anna: I understand, Andreas. You needn't
Andreas: I am dead. No, that's wrong. Melodramatic. I'm not dead at all. But I live without self-respect. I know  it sounds ridiculous, pretentious. Most people have to live without a sense of self-esteem. Humiliated at heart, stifled and spat upon. They're alive, and that's all they know. They know of no alternative. Even if they did, they would never reach out for it. Do you understand me? Can one be sick with humiliation? Or is it a disease we have all caught? Isn't freedom a poison for anyone who is humiliated? Or is that word a drug which the humiliated use to so as to be able to endure?

As he rifles through a purse left by Anna Fromm (Liv Ullman), he finds a letter with a phrase that warns of 'physical and psychical acts of violence'. His seduction (or redemption) by the world moves dramatically to confirm that phrase.

Into the grays, browns and greens of Bergman's newly mastered color palette, burst the reds that threatens to become the sign of any human relationship – the deeper, the more violence necessary to break through to the other person. With Persona, The Passion of Anna marks the high-point of Bergman's achievement in the sixties. Liberated from any direct confrontation with theology, Bergman here translates his concerns into new terms. 'Why don't you do something you believe in?' Anna asks the architect, and Bergman's Brechtian cinematic practices are this film's answer.