A doctor's wife embarks on a stormy and passionate relationship with an American archaeologist. 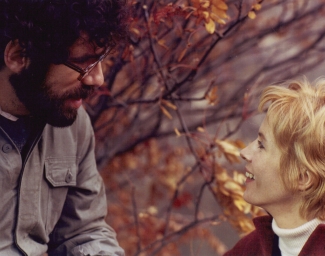 "In previous works, Ingmar Bergman has also created some of the most interesting portraits of women in the cinema. But in The Touch he creates, in my opinion, the most penetrating of them so far [...]."
Theodor Kallifatides in Chaplin

On the 5th of July 1970 Ingmar Bergman wrote in his workbook: 'I've finished the screenplay, although not without a fair amount of inner resistance. I baptized it The Touch. As good a name as any other. Now I'm going to take time off until August 3, when we begin the preparations in earnest. I feel depressed and ill at ease. I'd be happy to drop this film.'

For his own sake, he should perhaps have done so. Because The Touch is one of the few films with which Bergman is completely dissatisfied. As he puts it in Images: My Life in Film:

The intention was to shoot The Touch in both English and Swedish. In an original version that doesn't seem to exist anymore, English was spoken by those who were English-speaking and Swedish by those who were Swedes. I belive that it just possibly was slightly less unbearable than the totally English-language version, which was made at the request of the Americans.

The story I bungled so badly was based on something extremely personal to me: the secret life of someone who loves becomes gradually the only real life and the real life becomes an illusion.

Bibi Andersson felt instinctively that this part did not suit her. I convinced her to do it anyhow, since I felt I needed a loyal friend in this foreign production. Besides, Bibi has a good command of English. The fact that she became pregnant after having accepted the part threw a terrible monkey wrench into what seemed, on the surface at least, a matter-of-fact, methodical production set. Cries and Whispers began to make its way forward during this depressing period.

Prior to its premiere in Sweden, The Touch was screened at the Berlin Film Festival. Swedish critics and journalists reported a disastrous reception, adding some negative comments of their own. The reports caused one of the film's stars, Bibi Andersson, to go on the defensive:

One is often tempted to respond to criticism, yet it is best not to do so. Partly because one will never get the last word, and partly because one is wary of being suspected of injured vanity. One's vanity does take a few knocks, so one is fully justified in questioning oneself. But in the light of all the off-the-cuff reviews and gossip written about The Touch in Berlin, my respect for the printed word has diminished and I am emboldened to venture my own views on the film. [...]

First of all, I would like to protest at the claim that the film was booed. I myself stood on the stage to receive the applause, and did not hear one single boo, although I was prepared for the worst. Everyone, critics included, knows that Berlin audiences take a special delight in booing films. Richard Harris is even reported to have booed back, rightly or wrongly  I am not sure which. Perhaps people booed at a different screening from the one I attended. [...]

I am grateful that I only heard positive reactions and was praised, otherwise I would not have dared to go the press conference so willingly. I was so naïve as to be saddened by the fact that I did not see one single Swedish journalist there. One is usually grateful for an encouraging nod or look from a fellow countryman, accustomed as one is to being judged. [...]

The film is 'banal' in the sense of being 'ordinary'. It is about a man, a wife and a lover. I find it strange, on the other hand, that this should be uninteresting. I do not know any woman who has not at some time been touched by Karin's dilemma. Nor any man, for that matter. [...]

So long as we are banal human beings with conflicts that are often banal, I think it would be becoming if we were to embrace banality with at least a smile of recognition.

Given the nature of the initial reports coming out of the Berlin Festival and Bergman's own, much-quoted , bitter self-censure, it is interesting to note that most criticism of the film in Sweden was actually positive (although not exactly effusive).

In previous works, Ingmar Bergman has also created some of the most interesting portraits of women in the cinema. But in The Touch he creates, in my opinion, the most penetrating of them so far, and via the simplest means.

It has been remarked that The Touch is about relationships between people, various types of contact between them, etc. This is a valid point. (Yet) my own view is that the film is about something else: namely, the difficulty of getting in touch with oneself, of getting to know who one is, where one stands, when one is lying and when one is being truthful. [...]

Bergman appears to imply that one needs to undergo a passion if one is ever to be able to see one's true reflection in the mirror. That may be so. It does not need to be so. Everyday events can be just as damned important when it comes to finding out about oneself. Certain aspects of everyday events, at least. But everyday events in the beautiful homes of the bourgeoisie do not present such opportunities. Karin has to escape into a grand passion, happiness or misery, or both. That is not banal, it is simply a fact. (Meeting) her lover provides her with an opportunity, as does her mother's death. These two events coincide. The woman has awakened, yet is still somewhat drowsy. What Bergman shows us is her entire route to consciousness, and he does so in masterly fashion. Only Strindberg knew more about women.

The dialogue in the film is among the best Bergman has ever written. There is both humour and subtlety: I enjoyed the nuances between the language of the married couple and the language she speaks with her lover. It is one of the quietest films Bergman has made, despite the rather high amount of dialogue.

In Bergman's recent films (with the exception of the relapse in The Rite) his previously violent trials and tribulations have given way to a more down-to-earth camera angle and a more low-key tone. The problems of philosophy have been re-formulated to issues of coexistence. His world is still one of a very special middle class nature, yet it is as if the strong feelings of insularity in his films have been in recession.

The Touch continues in this vein. It is somewhat reminiscent of the Bergman of the 50s prior to the religious period, when he was a kind of Olle Hedberg* of the cinema, a portrayer of manners with overtones. It is undoubtedly one of his minor films, (although) one that is lighter in tone without being shallow, and one which counterbalances certain remarkable shortcomings with an indisputable skill of execution.

*"OH...Swedish novelist whose stylistic precision and elegant craftsmanship served to satirize the conventional world of the middle classes..".(Encyclopaedia Britannica)

The Touch is a shallow and banal film which for almost two hours avoids all the moral and psychological complications of that most obsolete of themes: the husband, the wife, the lover. This observation, between film viewers, should not really cause more than a shrug of the shoulders. But let us raise the stakes a little, because The Touch is Ingmar Bergman's latest film. This guarantees, at least, that the banality acquires a considerable curiosity value.

A review by a certain Lars Olsson in the small-circulation film magazine Filmrutan discerned some early product placement in the film: ''The Gotland exteriors are the stuff of tourist propaganda: manicured landscapes shot in beautiful tones. And the interiors seem to be an advertisement for a furniture store. (To a certain extent, this film really is a commercial, since so many brands are on such prominent display.)''

Expressen sensed a scoop in the offing. Had the art house director par excellence been reduced to this? An article appeared on the subject which eventually prompted a reaction from the director himself:

Olsson has missed a great deal. He has not grasped that there is an entire consortium behind The Touch. Professor Carl Malmsten* donated furniture anonymously. "Scraps" will be bagging ten percent of net profits because they gave us an old sofa. "The Glycerine & Rosewater Corporation" helped Bibi Andersson with her tears and will be getting a cut based on the amount of snivelling going on in the audience. [...]

Seriously though, Olsson's accusation is completely absurd. It is without grounds. There is not one penny of advertising revenue behind The Touch. But it is touching to think of a film critic, his pen going ten to the dozen, counting vacuum cleaners. The interest in my films appears boundless

The truth is that the furniture and props in The Touch worked out 100 per cent more expensive than we had estimated. This huge increase was due to the fact that we were no longer permitted to borrow props. The companies and factories that once looked kindly on us now demanded hire fees. They had grown tired of television and other, less scrupulous, film companies returning borrowed goods that were either worn out or broken. [...]

Otherwise, is it not quite common for private filmmakers to sell advertising space in their works?

It does indeed happen. And I have to say that I find it hard to get worked up over the fact that a petrol company is so bloody stupid as to think that it sells more petrol if the company symbol is seen in a film for a few seconds. Why say no to their money? We filmmakers work under enormous financial pressure. Personally, however, I have managed to get by without vacuum cleaner money.'

Ingmar Bergman's first film in English, stars Bibi Andersson as Karin Vergérus, a Swedish housewife trapped in a stable but somewhat unsatisfying marriage with a small-town surgeon (Max von Sydow). When the lively, engaging Jewish American archaeologist David Kovac (Elliott Gould) enters the picture, Karin gives in to her attraction and begins an affair. But Karin's new relationship turns out to be less fulfilling than she had hoped, and she is torn between staying with David and returning home to her husband and children.