An austere study of rape, evil and death, based on a 13th century folksong. 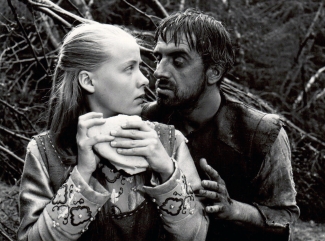 "At the time I'd thought it a good film, one hell of a fine film! I considered it one of my best films. I thought it was magnificent."
Ingmar Bergman

Based on a 13th century folksong, the screenplay was written by Ulla Isaksson. Bergman has often spoken of Akira Kurosawa's Rashomon as one of his favourite films. The Virgin Spring undoubtedly owes a debt to this work, as it also does to Victor Sjöström's cinematic studies of nature.

The film was shot at various locations in Dalarna, including Styggforsen and Skattungby.

The original PR material contained a short piece written by Ingmar Bergman entitled: Pages from a Non-Existent Diary. He tells the story of a rainy morning in the late spring of 1959: 'All were active in order to keep warm. The temperature was about the freezing point, and now and then snowflakes appeared from the ice-grey mist.'

The crew struggled to get the ageing camera equipment working in the harsh weather, when suddenly the clouds parted and the sun shone through. Time for a take: 'However, as the rays of the sun penetrated and sparkled across the mysterious darkness of this water in the forest and through the transparent spring green of the Swedish birch trees, someone called out loudly and pointed to the sky.'

Two cranes were flying majestically over the treetops. Everyone stopped working to admire the scene. When the birds had disappeared, Bergman mused for a moment over how pleasant it would be to have a Hollywood-like setup at his disposal:

'[...] to have a camera track that was not buckled, a camera truck that does not creak, and it would be quite an event just for once to make a motion picture with a budget of over two hundred and fifty thousand dollars, just for the experience. However, despite all that I am turning down the American offer down flat. I felt a sudden happiness and relief. I felt secure and at home.'

The scenes of violence in the film caused a heated debate in the press. The film censors were criticised for passing it without cuts, and one individual actually complained to the Swedish Parliamentary Ombudsman (who did not, however, see fit to take any action).

The film won several international awards, including an honoray nomination and the critics' award at the 1960 Cannes Film Festival. It also picked up the Oscar for Best Foreign Language film of 1960, presented on 17 April 1961.

The film divided the critics: with one or two exceptions they acknowledged Bergman's superb craftsmanship but were sceptical towards the subject matter and Ulla Isaksson's literary screenplay. Carl Björkman, writing in Dagens Nyheter, was among those who were deeply impressed. He called The Virgin Spring Ingmar Bergman's best film, "a work that ranks with the finest Swedish art and poetry currently being produced," deeming that its artistic merits placed it "among the elite of world cinema." Writing in Svenska Dagbladet, Lill also found it a profoundly moving experience: "In essence, The Virgin Spring .... is the most terrible thing one has ever witnessed in film. It hits home like a fist between the eyes, like a dagger to the heart. Yet in its silence, its aesthetic integrity and its artistic control it is still a far cry from the more base style of nerve-janglers usually served up on the screen."

'The Virgin Spring will not go down in history as one of his best efforts, nor is it one that triggers our most colourful superlatives. The film is paradoxically enough when one considers the density of the material  somewhat loose in execution, slightly shaky in its composition, and somewhat split and circumspect in its attitude to the emotions it purports to advance.'

Staffan Tjerneld (Expressen) felt that he had witnessed a "a complete, definitive and unique work of art", yet he was not entirely without reservations: "Some people feel that Ingmar Bergman might have opted for a legend that its not quite so awful. Others  myself among them  find the rape scene offensive. Perhaps inappropriate, too, in an age with such a propensity for that particular crime."

Robin Hood in Stockholms-Tidningen had reservations about the screenplay:

'Ulla Isaksson is more of a literary author than a poet of the screen. Accordingly, she has a weakness for words. [...] Not much is spoken in the film, yet it is still too much. [...] One has the feeling that Bergman has set about the task with cheer, but rather like a director commissioned with staging someone else's ready-made "play". [...] It is as a masterpiece of film direction that one savours The Virgin Spring.'

Writing in Bonniers Litterära Magasin, Jörn Donner produced a detailed analysis of the film's world of ideas, emphasising its links to the themes of Bergman's earlier works:

It is obvious that The Virgin Spring advances an important thread in his output. He is concerned, most notably in Sawdust and Tinsel, with moral issues surrounding the honour of degradation, the nobility of the defeated, a direct follow-on from the issues of his work in the 1940s. As an artist he stands on the side of the vanquished, the unrepentant, the innocent sufferer, and he is well aware of the fine dividing line between vice and virtue. The concept of a redemption and a purification of evil torments him, and [...] his art develops from this foundation into poetry of a universal kind.

Since Andrei Tarkovsky stated that he was "only interested in the views of two people: one is called Bresson, the other is called Bergman" (Sculpting in Time, 1989), the fact that his last film was shot in Sweden with several members of Bergman's team, including Sven Nykvist, Allan Edwall and Erland Josephson, was hardly surprising. Tarkovsky originally wanted to shoot the movie on Fårö, where Through a Glass Darkly, Persona, Shame, The Passion of Anna had been shot, but he eventually had to settle for Närsholmen south of Ljugarn on the adjacent island of Gotland. In The Sacrifice, Tarkovsky quotes the scene where Max von Sydow is struggling with a birch in The Virgin Spring:

A somewhat surprising remake of The Virgin Spring is Wes Craven's classic horror movie The Last House on the Left (which in turn has been remade with the same title by Dennis Iliadis in 2009).

[The "Legacy" section is written and compiled by Charlotte Renaud. Look here for heirs to other Bergman films.]

Bergman went to a medieval wellspring, a folk song whose simplicity and stark violence he recreated in purely visual terms, for his first collaboration with cinematographer Sven Nykvist. A girl in the bloom of innocent sensuality, the apple of her father (Max von Sydow)'s eye, is raped and murdered. A young boy who has watched his brothers perform the act suffers along with them the father's terrible revenge. Bergman's medieval forays derive their strange beauty from the fact that early Christianity seems foreign and mythic to contemporary viewers. But this only makes strange the modern-day films like Winter Light whose struggles are no less Manichaean than those of The Virgin Spring. Conversely, no film in his oeuvre could be more modern in terms of its Freudian overtones, and the agnosticism it provokes in the viewer. 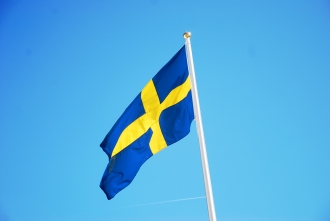 The relationship between Bergman and his country of birth was a complex affair.