Unconventional production of Ibsen's drama, with the focus on Hedvig (Lena Nyman) which met with what were possibly the best reviews that Bergman had ever received for his theatre work. 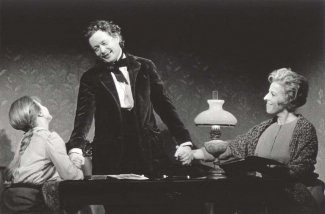 'I am certain that The Wild Duck will be considered one of Bergman's most superior productions.'
Leif Zern, Dagens Nyheter

When Ingmar Bergman put on The Wild Duck at The Royal Dramatic Theatre in 1972, his take on the play was hardly traditional. The drama usually centres on the mental conflict between Gregers and Hjalmar. Bergman opted instead to make Hedvig the central character of the play: it was through her eyes that the audience viewed the sequence of events. This interpretation was further reinforced by the mise-en-scene. Traditionally the attic is placed at the back of the stage, and what takes place there is consequently hidden from the audience. Bergman reversed this idea, turning the attic outwards. This gave it a prominent position, one which heightened its symbolic significance. The contrast between the shabby studio and the attic thereby became an important theme of the production as a whole. It also brought the actors closer to the audience, making it possible to interpret their thoughts and feelings from their facial expressions.

As always in Ibsen's dramas the past casts a long shadow over the present, and this was visually reinforced by Bergman. The Werle house, for example, featured a portrait of Gregers' dead mother. This was especially significant in the scene with Old Werle, Gregers' father and the former business partner of Old Ekdal. It demonstrated how the memory of his beloved, yet deeply unhappy mother was always present in Gregers' psyche. This maternal portrait had a counterpart in the Ekdal home, where Gina was a calm and collected influence, whose down-to-earth motherly nature held things together. The production emphasised how various aspects of motherliness had formed and were still moulding Gregers' and Hjalmar's lives.

Time and time again, reviewers remarked upon the outstanding cast to which Bergman had access. Leif Zern's review in Dagens Nyheter is highly complimentary, especially of the idea of making Hedvig the central figure of the drama. Zern writes that it is in 'the portrayal of Hedvig's death, the meaningless sacrifice brought on by the truth-seeking Gregers Werle, that Bergman's miraculous mise-en-scene finally crystallises into its moment of truth'.

Zern is particularly taken with the brilliant idea of facing the attic towards the audience. 'Without props, and only with the help of the lighting and the actors themselves, Bergman creates before the audience's very eyes the fantasy world that Hjalmar and Old Ekdal have built up. Here, in a couple of scenes so concentrated and poetic that I have never seen the like before, dreams and the night predominate.'

Full of praise for the entire cast, Zern is especially intrigued by the casting of Max von Sydow as Gregers. Sydow's physical presence is a dynamic contrast to the repressed, stammering character of Gregers that Sydow makes of him, racked occasionally with mildly hysterical laughter. Other critics also commented on this interpretation. Zern concludes with the words, 'I am certain that The Wild Duck will be considered one of Bergman's most superior productions. He seems right now to be in a period of unusually confident creativity in the theatre: hence his fusion of knowledge and freedom.'

'That Lena Nyman has been able to compete with, and even surpass, most of her predecessors is down to the fact that she consistently displays the amazing talent of alluding to the teenager and the child at one and the same time. She can wipe her hand across her face as only a child can, keep her mouth open like a child, and also convey a child's sense of bewilderment when thinking aloud.' (Åke Janzon, Svenska Dagbladet)

Ernst-Hugo Järegård as Hjalmar provoked somewhat more mixed reactions. Some felt that Järegård's style of acting had a tendency to be too inflated and talkative, and that elements of buffoonery threatened to take over. Henrik Sjögren, writing in Kvällsposten, thought that the production, as a whole, was somewhat too obvious. 'It underlines too heavily. This may have something to do with Ernst-Hugo Järegård's tendency to adopt a knowing, sententious tone as Hjalmar Ekdal.' Later on, he refers to Järegård's Ekdal as, 'A small man, a clown without substance, so unusual that he falls well outside the bounds of the universal.'

Zern, on the other hand, does not feel that this tendency towards clowning disturbs the play as a whole, but rather that it serves to exemplify the tragic elements of Ekdal's character. 'With his rosy, cherub face, Järegård becomes a sort of domestic bohemian, an actor in the bosom of the family, not the gloomy, tortured, self-pitying genius: even his self-pity is a role to play, plain for all to see'. And childishness of that kind is especially lethal for children, Zern observes.

Italy, Florence, 28-29 April 1972
According to the reviewers the performance was 'a triumphant succes'.

Germany, Berlin, Freie Volkbühne, 1-2 May 1972
There was some scepticism among the Berlin reviewers about Ibsen's relevance in today's theatre. But according to the reviewer Krasch, 'Bergman's production shows that the psychological theatre is not dead'.

Switzerland, Zurich, Stadthof 11, 4-6 May 1972
Bergman was a very current name in Zurich during The Royal Dramatic Theatre's guest visit, for his film The Touch had just premiered. Some reviews paid more attention to the film than to The Wild Duck production.

Norway, Oslo, Det Norske teatret, 4-6 June 1974
The reviewers thought that Dr Ibsen himself might have pulled his whiskers in approval of Bergman's mise-en-scene, since the production was so masterful.

Denmark, Copenhagen, Folkteatret, 26-27 April 1973
Danish theatre critics outdid each other in superlative praise of the performance they called fantastic, brilliant, and matchless.

UK, London, World Festival Season, Aldwych Theatre, 28 May- 2 June, 1973
There were eight guest performances in London, where the production met with rave reviews. The quality of the acting was universally praised, at once simple and bold in style. The reviewer of the The Financial Times referred to Berman's staging as 'absoloutely brilliant production and acting'.