Bergman's second direction of Wood Painting, which served as the basis for The Seventh Seal, having previously produced it for radio. 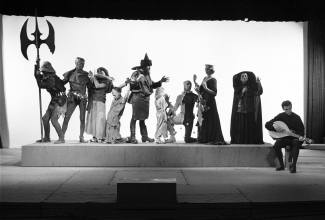 Bergman originally wrote the play for his students at the Malmö City Theatre, but he decided to stage a full production of it at Intiman in Malmö. The play was part of a triple bill alongside The Ends of the Earth by Sigvard Martenson and Feather Ball by Lars-Levi Laestadius. This was the last time that Bergman directed one of his own texts during his time as head of the Malmö City Theatre (1952-1958). The premiere was 18 March.

Though one critic (Bergstrand) found the play 'a definite victory both for the writer and director Ingmar Bergman', the critical consensus was (once more) that Bergman was a better director than playwright. The main critique focussed on Bergman's tendency to ignore character conflict and focus too much on an emotional display of eschatological fear and distress.

Wood Painting derives from a medieval altar screen depicting various figures: a knight, a squire, a pregnant woman, a witch, a young girl, a jester, a blacksmith and his wife. A youth dressed in black plays the lute and tells the dreadful story of the plague. The altar screen was recreated in the theatre by showing the group to the audience in silhouette before the curtain went up, with the various characters frozen in various expressive poses. The play is about their attempts to avoid the plague. Finally, they all dance down into hell at the command of a skeleton, a symbol of death.

The theme of the game between the jester and Death, in which the Devil is the director, was to recur in the film The Seventh Seal. The play also contains the dance of death, a powerful image. It is a clear example of Bergman's tableau style, which features both in his films and his stage productions.

In Sweden there have been four official productions of Wood Painting. The first was directed by Bergman for Radioteatern. He also directed the second himself for Malmö City Theatre. Later on, Bengt Ekerot was to stage a production at the Royal Dramatic Theatre, and Lennart Olsson made a television version.