The emphasis was on violence in Bergman's only production of Hamlet, themed in red, white and black. 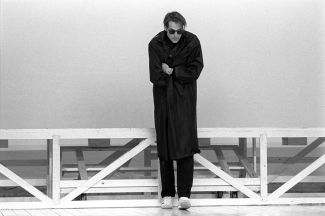 'One of the best productions of my life, one of the most enduring, strongest, most intense and angry productions I have ever staged.'
Ingmar Bergman

'Blood is the theme of this interpretation,' wrote Ingmar Björkstén in Svenska Dagbladet. Michael Bonnesen, writing in the Danish Politiken, also described how the production emphasises violence and Hamlet's powerlessness, both personal and political. This was borne out especially in the violent final scene, in which Fortinbras' leather-clad soldiers, armed with machine guns, burst in and mowed down everyone in their way to the accompaniment of thunderous Danish rock music. This ending prompted a number of associations with a fascist military dictatorship, where morality is as notable in its absence as it was under Claudius' regime.

Bergman re-worked the original text considerably. For example, he moved the 'To be or not to be' monologue to the scene in which Hamlet instructs the travelling players before the performance of the play intended to reveal the circumstances of the murder of his father. By transposing this monologue, he emphasised one particular theme of his interpretation: life as theatre, theatre as life. Hamlet became an actor in the drama about his own life. Many critics noted this in their reviews, together with the striking physical similarity between Peter Stormare and the young Ingmar Bergman.

Bergman also got certain actors to double up in different roles, further emphasising his own interpretation of the play. For example, Claudius was played by Ulf Johanson, who also appeared in the role of the gravedigger. Per Myrberg played both the ghost, who reveals to Hamlet what actually happened, and the principal actor of the travelling players, to whom Hamlet addresses the 'To be' monologue.

In Bergman's production, Ophelia became a more central character than is usually the case. She was on the stage all the time, even in the scenes in which she had no speaking part, a dumbstruck, terrified witness to the action. Writing in Arbetet, Bertil Palmqvist noted the dream-like atmosphere of the production, in which the borders between the internal and external were erased. This was especially true of the portrayal of Ophelia, which Palmqvist interpreted as Bergman presenting the nightmare of Ophelia, 'this young person's painful experience of the world's brutality'.

The production went on tour to London and New York, where it was generally well received, being regarded as refreshingly youthful, raw and modern. Even though it did not work in parts, the overall impression was positive. One critical voice in New York, Clive Barnes, felt that 'Bergman's Hamlet is a 20th-century neurotic who, at best, is ready for the psychiatrist's couch, at worst, for the morgue: [...] a mismatch in which the characters appear bizarre, verging on the perverse'. But he did concede that, 'The performance is nonetheless full of energy that casts an extraordinary light on the play'.

A number of critics noted the pared back and somewhat raw qualities of the production. Carlhåkan Larsén writing in Sydsvenska Dagbladet:

Ornamentation has been stripped away, what remains is the bare stage, the empty void. Beams of light sculpt various acting spaces, other props appear only sparsely. Gradually one notices the dark walls that encompass the wide stage. It is like being at the bottom of a cistern.

Peter Stormare received praise for his powerful and dynamic performance, a worthy combination of hot and cold. His interpretation of the role was seen as multi-dimensional, with warmth and authenticity alongside 'sarcastic verbal artistry' and furious outbursts. Not least the particular warmth in the meeting with Ophelia. 'Stormare has a naked, almost skin-less presence that gives vigour to the production.' (Sverker Andréasson, Göteborgs-Posten)

But not everyone was equally impressed by Stormare's Hamlet. Palmqvist described his performance as lacking in rhythm, devoid of the nuances and of the charm that Hamlet nonetheless possesses. Stormare himself ought to learn from the advice that Hamlet gives the players: not to 'saw the air too much' with his hands, nor to 'split the ears of the groundlings' with his booming voice. Most negative in her criticism was Tove Ellefsen writing in Dagens Nyheter, a review which sparked off a debate about the very nature of drama criticism. Ellefsen thought the production was highly conventional, concluding that, 'No, this is not a Shakespeare worthy of Bergman. Nor indeed a Bergman worthy of Shakespeare'.

Italy, Florence, Pergola Theatre, 10-12 January 1987
The electricity needed for the performance made the electric company in town shut down the lights in two villages outside of Florence, as well as at a fashion show. The reception of the performance was mixed, but it was a great audience success. There was a critical consensus in that this was Bergman's Hamlet as much as Shakespeare's. 'This was the same Shakespeare that mixed magic and death in Fanny and Alexander,' one critic wrote.

UK, London and Edinburgh, Lyttleton stage, National Theatre, 10-15 June 1987
One critic wrote, 'This is the most vital production of Hamlet I've seen in years. Though I speak no Swedish, it kept me at the edge of my seat throughout a marvellous evening [...] Bergman and his actors have revived, in Swedish, a play on the British stage which we have come to regard, in the last decade, as a tiresome exam test.' Other reviews were more critical and echoed the Swedish reception. One stated, 'Why the National Theatre invited (Bergman) to bring this vulgar and pretentious production of Hamlet is a mystery to me.'

USA, New York, Brooklyn Academy of Music (BAM), 10-17 June 1988
There were a total of eight performances at BAM. The performance was visited by the Swedish King and Queen because of the New Sweden jubilee, celebrating the 300th anniversary of the Swedish founding of a colony in America in present-day Delaware. The reviews were mixed, from the remark, 'I can't think of any modern director who has turned words into flesh so consistently, and with such obsessive force, as Bergman does here', to negative responses of Bergman's 'mish-mash' of styles and time periods.

Japan, Tokyo, The Globe Theatre, 2-3 and 5-9 July 1988
Seven performances were given and although the audience was very attentive, the actors found the response tame.

The Soviet Union, Moscow, Stanislavsky's Artistic Theatre, 27 September-1 October 1988
In Moscow the Hamlet production was part of a double bill with Bergman's staging of Miss Julie. Bergman's approach was considered that of a daring traditionalist turned radical man of the theatre. One critic called the performance 'a shattering theatre experience'.