Bergman's second production of The Legend out of three was at the end of his time at Malmö City Theatre, and was even taken abroad. 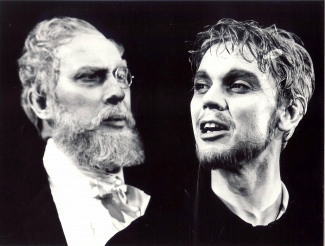 'However it was not superb, which was not helped by the fact that Ingmar did everything in his power to deliver - and simultaneously balance out - Hjalmar's work.
Henrik Sjögren

In his second staging of The Legend, Ingmar Bergman toned down the lyrical fairy tale elements and focussed on the darker, magical aspects of the play. Especially noteworthy was his use of his mechanical encounter between the older Ehrenstål family and the vulnerable young lovers.  Ingmar Bergman's Malmö production was said to improve upon the original text by giving it a new clarity of vision and by stylizing the realistic middle section of the play.

It's clear that the Malmö production of The Legend confirmed Ingmar Bergman's position as one of Sweden's outstanding theatre directors, while suggesting that his impressive stagecraft was related to an increasing ability to subsume his own vision to that of the original dramatic text.

The Legend production was invited to the Theatre of Nations festival in Paris in April 1959. The time of the guest performance coincided with the French opening of Bergman's film Wild Strawberries.

The enthusiastic audience reception on opening night was mostly reserved for Ingmar Bergman who appeared in person after the performance. The audience on opening night also included 400 journalists from 25 countries. Most Swedish press releases about the guest performance paid little attention to the critical response to Bergman's production and focussed instead on the public event itself.

All three performances were sold out. The reputation of Bergman as a gloom-and-doom Nordic filmmaker had preceded his presentation of The Legend in Paris. The reviewers wrote: 'Anyone who's familiar with Mr Ingmar Bergman's passion for the macabre and lugubrious of the human predicament will understand why he was attracted to his drama'.

Paris, Theatre Sarah Bernhardt, 23-25 April 1959
The time of the guest performance coincided with the French opening of Bergman's film Wild Strawberries.
All three performances were sold out. The audience included the likes of Albert Camus, Jeanne Moreau and Samuel Beckett, as well as 400 journalists from 25 countries.

Many critics have found the piece hard to characterise. Consequently, it is also hard to stage a production that does justice to all its nuances and levels. In certain parts the play has a decidedly lyrical character which, in others, is in stark contrast to a considerably more robust realism that bears witness to the author's insights into the brutality of life. The plot has the quality of a dream, a fantasy: it is a fairy tale about the light of love in contrast to the blackness of deceit.

Many commentators, Ingmar Bergman included, have pointed out the play's striking similarities to Alfred de Musset's play One Doesn't Trifle with Love.