Stig Järrel plays Satan, who sets Don Juan the task of seducing a virgin and to wipe out all purity on the earth. 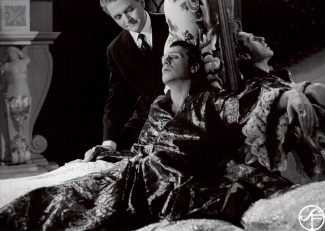 "Ingmar Bergman's comedy is not of the kind that induces laughter. Yet it is enjoyable. One feels like an elderly gentleman with a glass of sherry in one hand and a classic, leather-bound tome in the other."
Staffan Tjerneld in Expressen

Ingmar Bergman on the genesis of the film in Images: My Life in Film:

'The studio had bought the rigths to a dusty Danish comedy called The Return of Don Juan. Dymling and I entered into a shameful agreement. I wanted to direct The Virgin Spring, which he detested. He wanted me to direct The Devil's Eye which I detested. We were both very satisfied with our agreement through which both could be made, and each one of us felt that we had fooled the other. In reality I had only fooled myself.'

The general view of the contemporary critics might perhaps be encapsulated by a quotation about Ingmar Bergman in Jurgen Schildt's review in Aftonbladet: '(Even) given his occasional lapses into crushing banality he is nonetheless incomparable here in Sweden.' This would imply that the reviews were, on the whole, very reverential, evinced by the following extract from Robin Hood's piece in Stockholms-Tidningen:

'Bergman in this film has such a deft touch. Nothing is forced. And this so obviously carefree game revolves around a serious nucleus. A connoisseur of the female sex, Bergman presents us with two of the most beautiful, true-to-life portraits of women ever created in the cinema. He has the audacity  incredible for our times  to allow goodness and purity to come out on top.'

Staffan Tjerneld's review in Expressen is also typical of the way the film was received: 'Ingmar Bergman's comedy is not of the kind that induces laughter. Yet it is enjoyable. One feels like an elderly gentleman with a glass of sherry in one hand and a classic, leather-bound tome in the other.' Carl Björkman, writing in Dagens Nyheter, called the film, rather fancifully, 'a summer-house built in the grounds of a Swedish rectory'.

The devil has a stye in his eye, caused by the purity of a vicar's daughter. To get rid of it, he sends Don Juan up from hell to seduce the 20 year old Britt-Marie and to rob her of her virginity and her belief in love. She however can resist him and things get even turned around when Don Juan falls in love with her. The fact that he feels love for the first time now, makes him even less attractive to her and Don Juan returns to hell.