King Lear was Bergman's first production at The Royal Dramatic Theatre after his exile in Munich, with Jarl Kulle in the leading role in the wake of his success with Fanny and Alexander. 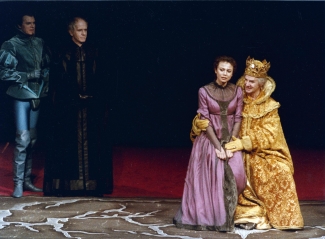 'It is unreal, dreamlike and wonderful to be back with one's own language, friends and the theatre I grew up with.'
Ingmar Bergman

2) He had the right actors for it

3) He thought the public would enjoy it.

As for his own relationship to Lear, he quoted Goethe. 'In an aging man there is always a King Lear'. Ingmar Bergman had not directed a Shakespeare tragedy since his third production of Macbeth in 1948. King Lear had not been staged at The Royal Dramatic Theatre since 1929. Bergman was hesitant about available Swedish translations of Shakespeare; therefore he commissioned a new translation that was to be 'a playable, speakable, and above all understandable version of King Lear'. Bergman calls Shakespeare's tragedy 'a secret continent'. He decided to approach King Lear as an existential drama and replaced Shakespeare's anachronistic references to classical mythology.

Bergman's homecoming and return to The Royal Dramatic Theatre seemed too remarkable that one reviewer suggested the Lear production be noted in the Swedish calendar as a cultural milestone, while his colleague Björn Nilsson vowed to see to it that Bergman come back permanently to Sweden, 'even if we must drag him by his hair through the waves of the Baltic sea.' Reviews emphasized the Lear production as Bergman's very personal reading of Shakespeare's tragedy and pointed to his qualities as an inspirer of actors and staff. There was almost complete unanimity that Bergman's disciplined and lucid direction had a beneficial effect on both set designer and choreographer, and that it released the best professional qualities among the actors.